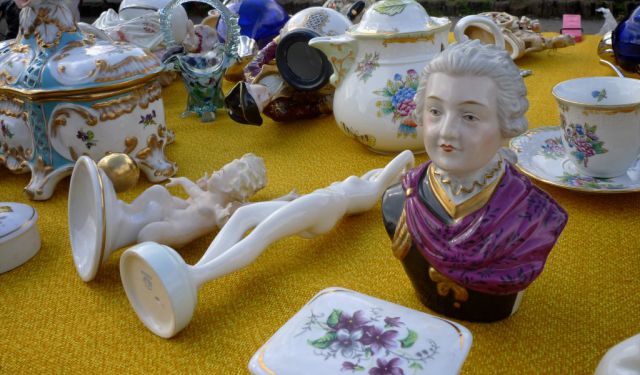 Just a few footsteps away from Budapest's parliament building is the most famous destination for antique shopping in the city, Falk Miksa Street. The range and quality of items from previous decades and centuries is second to none, so it is worth spending some time searching through the plethora of antique shops and galleries. Among the many valuable items you will come across are top quality paintings, statues, jewelry and furniture. They include Baroque, Art Deco and Art Nouveau pieces.

The area doesn't lack for highlights, and one of the most prestigious places is the Kieselbach Gallery and Auction House which exhibits and auctions Hungarian art as well as international works. Go to the Museum of Ethnography, housed in a palatial building opposite parliament. Investigate its 19th-century Hungarian folk objects and everyday items that predate World War II.

After your visit, walk over and photograph the parliament building, an outstandingly beautiful structure on the banks of the Danube River. It is the third largest parliament building in the world and a powerful symbol of Hungary’s independence. Admire the lavish ornamentation of this late 19th-century structure, including Neo-Gothic turrets and the high central dome.
Image Courtesy of Flickr and Andrey Pshenichny/beta.robot.
How it works: A discovery walk features a route using which you can explore a popular city neighborhood on your own. This walk, along with other self-guided walks in over 1,000 cities, can be found on the app "GPSmyCity: Walks in 1K+ Cities" which can be downloaded from iTunes App Store or Google Play to your mobile phone or tablet. The app's built-in GPS navigation functions allow following this walk route with ease. The app works both online and offline, so no data plan is needed when traveling abroad.

Image Courtesy of kinga b.