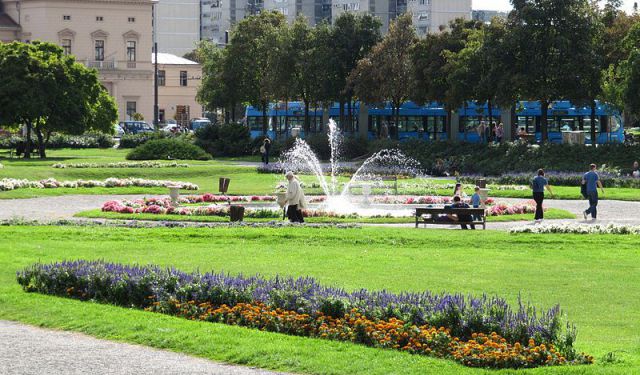 Image by Branko Radovanović on Wikimedia under Creative Commons License.

While you are in downtown Zagreb, follow Lenuci’s Horseshoe. This is a U-shaped area of seven landscaped town squares and a botanical garden. It was the brainchild of an urban planner called Lenuci toward the end of the 19th century.

Along the route are gorgeous parks, thousands of plants and flowers and many statues. Such is the outstanding charm and beauty of the horseshoe that it won a prestigious silver plaque in a competition of 2,400 European cities with a population of over 500,000 people. Venture into parks and meander along pathways. Rest on a bench and admire the beautiful pastoral scenes. Breathe in the heady scents of the flowers and appreciate their colorful forms. This is a horticulturalist’s dream. At any time of year something will be in bloom, making a walk along the horseshoe an attractive pastime no matter when you are in the city.

Among the famous sights included as part of the horseshoe are Nikola Subic Zrinski Square and the Zagreb Botanical Garden. During your stroll, you will also be able to see some of Zagreb’s most important civil and cultural institutions, which are situated nearby. They include the Croatian National Theatre and the Academy of Dramatic Arts.
How it works: A discovery walk features a route using which you can explore a popular city neighborhood on your own. This walk, along with other self-guided walks in over 1,000 cities, can be found on the app "GPSmyCity: Walks in 1K+ Cities" which can be downloaded from iTunes App Store or Google Play to your mobile phone or tablet. The app's built-in GPS navigation functions allow following this walk route with ease. The app works both online and offline, so no data plan is needed when traveling abroad.