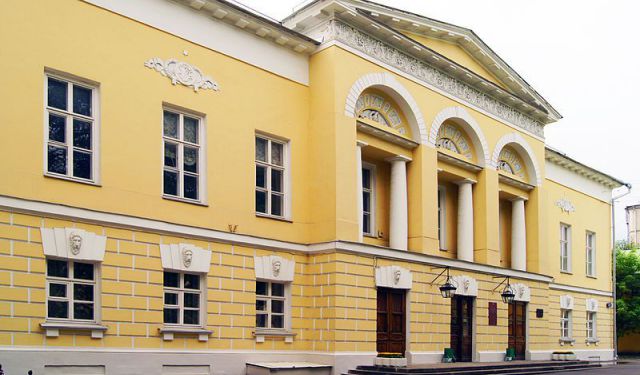 Image by Moreorless on Wikimedia under Creative Commons License.

Discover the exciting diversity and rich detailing of some of Moscow’s magnificent architecture when you go for a walk along Povarskaya and Bolshaya Nikitskaia Streets. They are lined with many historical and outstandingly beautiful mansions. Both streets rival each other for the title of Embassy Row.

Visit the western part of Bolshaya beyond the Boulevard Ring to look over the many Neoclassical mansions. These are old survivors, having made it through the wars and revolutions of previous decades and centuries. They are impressive reminders of the skills and talents of their architects and designers. The highlight of this street is the Grand Ascension Church, which was built during the end of the 18th and beginning of the 19th century.

Povarskaya Street is equally bestowed with grand buildings, including some of the finest mansions to be built in the late 19th century. See the Dolgorukov estate at number 52. The 18th-century manor was the model for the Rostov estate in “War and Peace.” At number 44 is the Art Nouveau Mindovsky Mansion, which is now the Embassy of New Zealand. During your time in the locale, amble down the side streets between Novy Arbat and the Garden Ring. This is where servants of the imperial kitchens used to live.
How it works: A discovery walk features a route using which you can explore a popular city neighborhood on your own. This walk, along with other self-guided walks in over 1,000 cities, can be found on the app "GPSmyCity: Walks in 1K+ Cities" which can be downloaded from iTunes App Store or Google Play to your mobile phone or tablet. The app's built-in GPS navigation functions allow following this walk route with ease. The app works both online and offline, so no data plan is needed when traveling abroad.