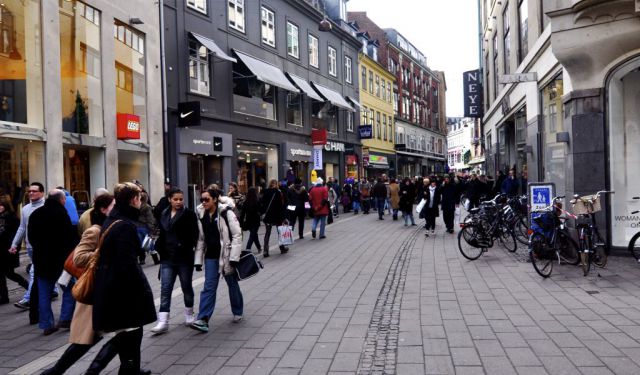 The Strøget area is a wonderful place to soak up the atmosphere of the city, among old Danish buildings, delightful squares and a lively shopping area. There are many good reasons for visiting Strøget, a pedestrian street in the center of the city.

First of all, it is considered to be one of the longest shopping avenues in Europe. There are stores where you can buy clothes by international brand names, such as Louis Vuitton, Tommy Hilfiger, Hermès and Burberry. But it’s not just about upscale fashions because there are also budget clothing stores. The thoroughfare also encompasses souvenir shops, restaurants, cafés, jewelry shops, shoe shops and much more. Your visit to this part of Copenhagen may sometimes be accompanied by music, because street musicians like to entertain the crowds who pass through Strøget's broad squares.

Among the architectural highlights of the area is the Round Tower. This 17th-century baroque tower is the oldest functioning observatory in Europe. Although frontline scientist have long since departed, the building is used by many amateur astronomers to make observations. Climb up its stairs for superlative city views from the outdoor platform that encircles the tower. Stand on the floating glass floor that is 25 meters (82 feet) above the ground.
Image Courtesy of Flickr and Dan.
How it works: A discovery walk features a route using which you can explore a popular city neighborhood on your own. This walk, along with other self-guided walks in over 1,000 cities, can be found on the app "GPSmyCity: Walks in 1K+ Cities" which can be downloaded from iTunes App Store or Google Play to your mobile phone or tablet. The app's built-in GPS navigation functions allow following this walk route with ease. The app works both online and offline, so no data plan is needed when traveling abroad.