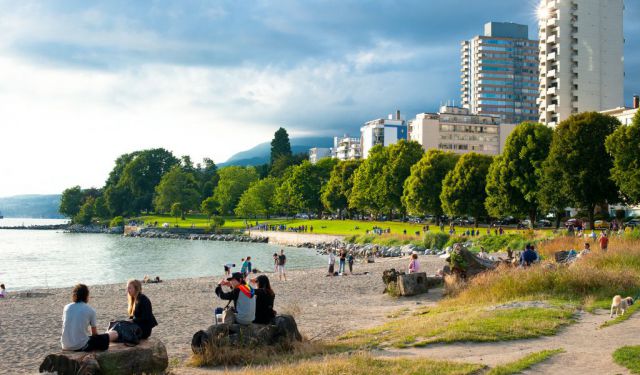 Come and explore Vancouver’s popular West End district, which is mostly residential and the heart of Vancouver’s thriving LGBT community. The area has a lot of high-rise buildings, but parts of it escaped the city’s urbanization projects so you will still find fine examples of late 19th century/early twentieth century buildings, especially on Barclay Heritage Square.

On Davie Street, among the numerous stores, restaurants and cafes, you will find Davie Village which is well-known for its adult shops, gay bars and a lively nightclub. It also has a splendid community garden where you can sit and watch life go by. On Denman Street you will find a large variety of excellent restaurants which offer traditional Canadian food as well as European, Asian and African menus. Most of them have on-going service so you’ll always find something to eat at any time of the day.

The West End district is bounded on three sides by water so after sightseeing and shopping you can relax on the beach in English Bay, or if you feel the need for a little exercise, you can hire roller blades or a bike and work off your excess energy along the paved Seawall a 9km stretch along the lovely coastline, around Stanley Park to Kitsilano.
Image Courtesy of Flickr and Kenny Louie.
How it works: A discovery walk features a route using which you can explore a popular city neighborhood on your own. This walk, along with other self-guided walks in over 1,000 cities, can be found on the app "GPSmyCity: Walks in 1K+ Cities" which can be downloaded from iTunes App Store or Google Play to your mobile phone or tablet. The app's built-in GPS navigation functions allow following this walk route with ease. The app works both online and offline, so no data plan is needed when traveling abroad.