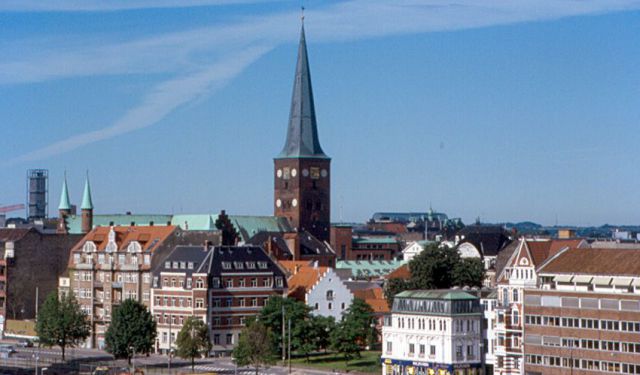 Aarhus is the second-largest city in Denmark. It is also one of the oldest cities in the country with roots that date to the 8th century when Vikings built a small settlement at the mouse of AArhus River encircled by an earthen rampart and a moat. Back then, Aarhus was called "Aros" which was the old Danish word for "river mouth".

During the Middle Ages, Aarhus was a prosperous religious center of the region. The AArhus Cathedral was built in the 12th century and became the center of town's urban life. In 1441, King of Denmark Christopher III granted Aarhus market town status and the charter is considered Aarhus' birth certificate as a city.

The commercial and religious status spurred town growth so in 1477 the defensive earthen ramparts, ringing the town since the Viking Age, were abandoned to accommodate expansion. Industrialization, especially the regular steamship links with Copenhagen and arrival of railway, caused the city to continue growing through the early 20th century.

Today, Aarhus is a popular place for tourists, especially those who wish to see history unfold before their eyes. As Aarhus was built in stages, visitors can catch glimpses from Viking and Medieval to Modern times. Architecture found throughout the city represents Romanesque, Gothic, Renaissance, Baroque, Rococo, National Romantic, Nordic Classicism and Neoclassical. Despite all of the damage the city has incurred over the years, it has managed to retain ample history to be a fascinating journey for tourists.

Spots like Bishop's Square and the Latin Quarter provide a rich taste of the region. The ARoS Aarhus Art Museum makes history come alive with vast exhibits and historical artifacts. The Old Town Open-Air Museum, locally known as Den Gamle By, lets visitors experience the history of the city firsthand.

Other spots, like Aarhus Cathedral and Aarhus City Hall, are worth visiting as well. The Salling Rooftop is a relatively new space that provides both entertainment and an excellent view of the city.

Take this self-guided tour to see some of the most notable sights in Aarhus!
Image Courtesy of Flickr and Roger W.
How it works: Download the app "GPSmyCity: Walks in 1K+ Cities" from iTunes App Store or Google Play to your mobile phone or tablet. The app turns your mobile device into a personal tour guide and its built-in GPS navigation functions guide you from one tour stop to next. The app works offline, so no data plan is needed when traveling abroad.

Bishop's Square is a city square near Aarhus Cathedral. It is also located near other well known attractions in Aarhus like the Aarhus Theatre, the Viking Museum and the Latin Quarter neighborhood. It is a wide, open square with plenty of room to roam on the cobbled ground or take advantage of shade from the trees along the southern wall.

The square was renovated in 2016 to create a public space that is used for concerts and gatherings. Prior to this, the square was used as a parking lot. However, it holds a much more important a place in the history of Aarhus.

In the late first century, Bishop's Square was a pagan burial site. Later, it was the seat of the Diocese of Aarhus. Aarhus Cathedral was built near the burial site, which turned the area into a spot that was largely dominated by the clergy. The land was purchased by the city of Aarhus in 1881.

An archaeological dig of the site in the 1960s uncovered many items from the Viking Age and they are now displayed in the Viking Museum near the square.

Bishop's Square is home to a statue of King Christian X atop a horse. During the German occupation of Denmark, Christian became a popular symbol of resistance. He used to ride daily through the streets of Copenhagen unaccompanied by guards and people stood and waved to him. The large statue is located in the grassy area northwest of the open square.


Image Courtesy of Wikimedia and RhinoMind.
2

Aarhus Cathedral is a Church of Denmark cathedral that was previously a part of the Roman Catholic church. The Gothic and Romanesque cathedral was completed in 1300 and dedicated to St. Clement, the patron saint of sailors.

Construction of the church started around 1190. It was built around St. Clement's church, a timber church built in 1102. The Romanesque architectural style included half-rounded arches, a flat timber ceiling and four chapels.

The cathedral suffered great damage in 1330 when a fire burned much of Aarhus. It was abandoned until 1449 when it was renovated and enlarged. The new design of the church used Gothic vaulting with high windows and a lengthened nave. It is now both the tallest and longest church in Denmark at 305 feet long and 315 feet high. The current, 314-foot tower was built in 1931.

There are more frescoes in Aarhus Cathedral than in any church in the country. They were painted between 1470 and 1520. Likewise, the painting of St. Christopher and St. Clement are the tallest in Denmark. The cathedral's one stained glass window was created by Emanuel Vigeland in 1926. At almost 46-feet tall, it is the largest stained glass window in Denmark.
Image Courtesy of Wikimedia and Martin Steggman.
3

Latin Quarter includes the main square of Pustervig Torv and several streets around the square. The name of the neighborhood was chosen in the 1990s due to the area's resemblance to Paris's Latin Quarter.

The quarter has a large number of shops, cafes and restaurants. It is also known for its active nightlife and entertainment venues. There are a number of small stages throughout the Latin Quarter where live music plays in the evening. Visitors will also find a number of galleries, studios and public art displays.
Image Courtesy of Wikimedia and RhinoMind.
4

River Boulevard is both a street and a promenade that runs along the Aarhus River. The street runs east to west from Vester Alle to Europaplads. At 975 meters (nearly 3200 feet) long, it is a popular thoroughfare used by pedestrians.

The history of River Boulevard dates to 1477. King Christian I allowed the development of the area near the river. Homes were built and later, in 1674, the alley that ran along the street was widened. River Boulevard itself was built in stages from 1898 to 1934.

A portion of the Aarhus River was briefly paved to provide room for a wider street and parking. Work to uncover the river began in 2005 and was completed in 2015. A new recreational space was created to celebrate the reopening of the river.

Salling is a department store in Aarhus. Customers can purchase clothing, household goods, beauty supplies, shoes, toys and more. However, many of the visitors to Salling arrive not to shop but to see the spectacular rooftop.

The Salling Rooftop is located atop the department store. It has a glass roof with a 360-degree, panoramic view of the city. The interior of the rooftop offers regular special events and entertainment. It is a popular dining spot and a place to get a cocktail or cup of coffee.

Along with the Salling Rooftop, Salling is now offering the Rooftop Garden. The garden is a combination of trees, plants and works of art.

Aarhus City Hall was completed in 1941 from a design by architects Arne Jacobsen and Erik Moller. It was designed to replace the Old City Hall, built in 1857, which is now home to the Museum of Women's History.

The building includes a 196-foot tall tower and a tower clock with a face that is almost 23-feet wide. The city hall is made with concrete plated with grey marble imported from Porsgrunn in Norway. Architectural details are completed on the exterior in copper that has since been covered in verdigris.

The entrance of the Aarhus City Hall is in the City Hall Park. The park includes a cobbled plaza and an avenue lined in linden trees. City Hall Square offers a fountain and a sculpture known as Ceres Bronden.

The interior of the city hall has oak parquet floors, patterned ceramic tiles, glass walls and a large number of brass and bronze accents. Visitors can take guided tours inside the city hall on Tuesdays, Thursdays and Saturdays.
Image Courtesy of Flickr and Colin.
7

The museum offers permanent and changing exhibitions. It also has a gift shop, a cafe and a restaurant. One of the most popular features of ARoS Aarhus Art Museum is the skywalk. Your Rainbow, crafted by Olafur Eliasson, offers a 360-degree view. It allows patrons to walk through the art installation and become part of the rainbow.

The Mill Path is a historic street in Aarhus. It is a cobblestone street with buildings constructed between 1870 and 1885. However, the street itself has been used in Aarhus since the 13th century.

The name "Mill Path" refers to the Aarhus Mill, which was first mentioned in 1289. The mill was located where the former Aarhus Main Library now stands at the western end of the street.

Sadly, the beautiful homes built in the late 19th century mostly fell into disrepair by 1925. The healthy soil that created an excellent basis for farmland because marshy and tenants were unable to maintain upkeep of the homes. Most of the street remained uninhabitable through 1960 when a renovation plan for the street was put together.

Students and artists moved into the neighborhood during the late 20th century. They painted many of the homes in bright colors, giving it the charm that is seen today. Renovations on the street led to many buildings being removed and replaced with modern structures. What is left is interesting architecture that is a favorite among the visitors to Aarhus.
Image Courtesy of Wikimedia and Anosmoman.
9

The Old Town Open-Air Museum in Aarhus was the world's first open-air museum of its kind when it opened in 1914. It focuses on the culture of the town with more than 75 historical buildings decorated in historical style and displaying exhibits of permanent and revolving themes.

The buildings in the Old Town Open-Air Museum cover a wide swath of time. Some were constructed in 1550 while others weren't built until the late-19th century. The buildings were brought in from all over the country and placed in the botanical gardens for the purpose of opening this museum.

Buildings located in the open-air museum include workshops, grocers, shops, historical gardens, a post office, a customs office, a school and a theatre. Museum staff work in historic roles like merchants and blacksmiths.

There are five permanent exhibits in the museum. These include the Danish Clock Museum, the Toy Museum, the Textile Museum, a pottery exhibit and a silverware exhibit. Old Town Open-Air Museum also offers a bakery, a bookstore, diners and cafes.