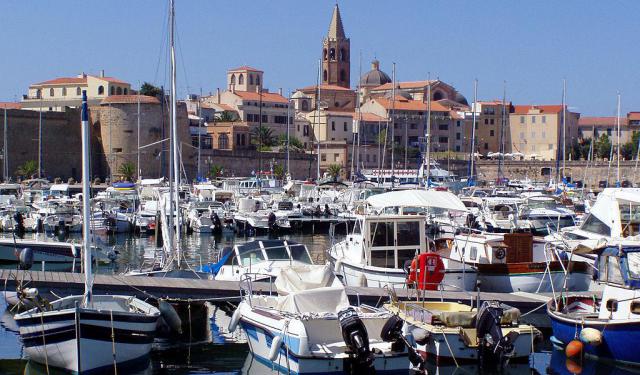 Image by Marek Ślusarczyk on Wikimedia under Creative Commons License.

Alghero is an attractive city overlooking the sea. This unique city sits on the island of Sardinia, at the place where the Sardinian and Catalan people united. Take this self-guided tour to admire the most stunning points of interest in Alghero.
How it works: Download the app "GPSmyCity: Walks in 1K+ Cities" from iTunes App Store or Google Play to your mobile phone or tablet. The app turns your mobile device into a personal tour guide and its built-in GPS navigation functions guide you from one tour stop to next. The app works offline, so no data plan is needed when traveling abroad.

Piazza Civica is located not far from the Port of Alghero. It is one of the largest and most significant squares in Alghero. Here you can find Palazzo d’Albis, which was once the governor’s palace. Piazza Civica is the place where Holy Roman Emperor Charles V gave his legendary speech to the people before the departure of the Sardinian military to fight the Turks.
Image by Stahlkocher on Wikimedia under Creative Commons License.
2

Maddalena Fort is the only survivor of the original three forts built at this location. It was constructed in the 16th century and was dedicated to Mary Magdalene. The statue of Mary Magdalene stands at the fort, although it is largely unrecognizable due to destruction from the passage of time. Today Maddalena Fort is used as a venue for summer events, jazz festivals and outdoor classical music concerts.
Image by Stahlkocher on Wikimedia under Creative Commons License.
3

The Museum of Sacred Art is one of the most important museums in Alghero. It is housed in the former Our Lady of the Rosary Catholic Church. It displays the valuable art collections of the city’s historic churches and cathedrals. Here you can see pieces that represents the cultural and spiritual life of Alghero, including wooden sculptures, paintings, statues and more.
Image by Sailko on Wikimedia under Creative Commons License.
4

Alghero Cathedral is a Roman Catholic cathedral was the seat of the Bishop of Alghero from 1503 to 1986, and since 1986 has been that of the Bishop of Alghero-Bosa. Alghero was designated as a diocesan seat in 1503 but construction work on the cathedral did not begin until the 1530's. It was not opened until 1593, and not finished and consecrated until 1730. It is the burial site of the Italian born Duke of Montferrat (1762-1799) and his brother Count of Asti (1766-1802) who died on the island having caught malaria. The church was originally in Catalan-Gothic style, as can be seen in the five chapels and ambulatory of the presbytery, which also includes the octagonal base of the bell tower. The nave and the two aisles are however in Late Renaissance style. In the 19th century a Neo-Classical narthex was added to the facade, which dramatically changed its appearance.
Image by Stahlkocher on Wikimedia under Creative Commons License.
Sight description based on wikipedia
5

Bastioni Marco Polo is located between the Tower of St. James (Torre di San Giacomo) and Bastioni Cristoforo Colombo. After significant renovation, Bastioni Marco Polo has become a popular place to visit and to enjoy the sunset. The numerous restaurants and bars in the area also attract the crowds.
Image by ComùnicaTI on Flickr under Creative Commons License.
6

The Civic Theater is located in the heart of Sardinian Square. It was built in 1829 and finished in 1862 by architect Franco Poggi. The last restoration was in 2004, and the stage and auditorium remain true to Poggi's original design. The Civic Theater is one of the most famous places in the city, as it serves as the venue for many cultural and artistic events. The interior of the theater was designed in the Neoclassical style, and the stage is surrounded by beautiful ornaments. The first performance held here was of the opera "Lucia di Lammermoor" by Gaetano Donizetti.
Image by antonellomusina on Flickr under Creative Commons License.
7

Dating back to 1360 and rebuilt in the late 16th century, St. Francis Church is one of the greatest examples of the Gothic-Catalan style in Sardinia. Original Catalan-Gothic parts can be seen over the high altar, the presbytery chapels and the San Sacramento Chapel. The building is made of stone and is characterized by its bell tower from the first half of the 16th century. The facade is ornamented with a lintel of classic style, in which is carved the emblem of the Franciscans surrounded by angels.
Image by wiseguy71 on Flickr under Creative Commons License.
Sight description based on wikipedia
8

Torre di Sulis, also known as Torre de l'Esperó Rejal, is located in Piazza Sulis. It was built in the 14th century by a local citizen named Vincenzo Sulis. The interior of the tower is separated into two large rooms. Torre de Sulis marks the end of Alghero's Old Town.
Image by S141739 on Wikimedia under Creative Commons License.
9

Miramare Cinema is the most famous movie theater in Alghero. It is located in Piazza Sulis, a popular meeting place for locals, especially youth. In the lobby of the cinema, there is a cafe where you can order drinks and popcorn.
Image by an opportunity for identity on Flickr under Creative Commons License.
10

Saint Michael’s Church is one of the most important Baroque-style buildings in Sardinia. In 1503 Alghero was designated as a diocesan seat, but the church did not open until 1593. The exterior of the building is accentuated by a plinth of squared blocks. The church is recognized for its colorful and uniquely designed dome.
Image by david.nikonvscanon on Flickr under Creative Commons License.
11

Palazzo Simon is located on Via Gilbert Ferret, close to San Giovanni Tower. It was built in the late 13th century and restored in the late 19th century. The building was designed in the Neoclassical style. Above the massive front door, which is framed by an arch, is the emblem of the Simon family, the first owners of the palace.
Image by Sailko on Wikimedia under Creative Commons License.
12

Central Market is located on Via Sassari, a few minutes away from Torre di San Giovanni. The market provides a unique food shopping experience. People come here to find a variety of ingredients, including meat, fish, fruit, vegetables and more.
Image by oliviacapel on Flickr under Creative Commons License.
13

The Public Gardens are located near Forte della Maddalena. The park is famous for its beauty. Take a leisurely stroll through the grounds and enjoy the wide variety of plants and trees. Important monuments such as the Unitat de la Lengua, the Giuseppe Manno monument and the War Memorial can all be found in the gardens.
Image by Benoît Prieur on Wikimedia under Creative Commons License.

Create Your Own Walk in Alghero

Creating your own self-guided walk in Alghero is easy and fun. Choose the city attractions that you want to see and a walk route map will be created just for you. You can even set your hotel as the start point of the walk.

The historic city of Alghero is home to some of the most significant architectural monuments in Italy. The city's palaces are beautiful examples of the culture and architectural style of centuries past. Take this tour to explore Alghero’s narrow, picturesque streets and its legendary palaces.