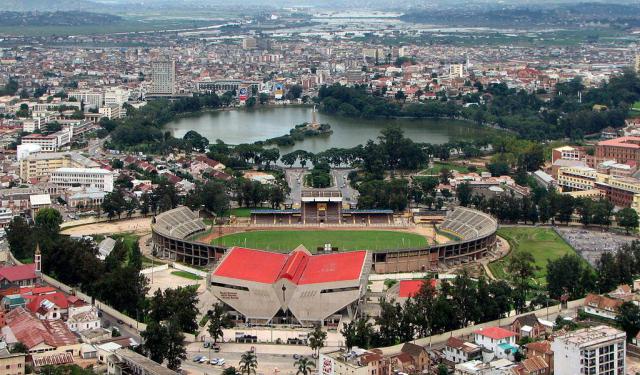 Antananarivo, also called Tana, is the most attractive and visited city in Madagascar. The fact that there are unusual places to hold one's interest makes it a unique place for anyone's vacation. The city's geographical location and culture make for a collection of beautiful things to see. Follow this orientation walk to discover the most attractive sights of Antananarivo!
Image Courtesy of Wikimedia and Bernard Gagnon.
How it works: Download the app "GPSmyCity: Walks in 1K+ Cities" from iTunes App Store or Google Play to your mobile phone or tablet. The app turns your mobile device into a personal tour guide and its built-in GPS navigation functions guide you from one tour stop to next. The app works offline, so no data plan is needed when traveling abroad.

1) The Rova of Antananarivo (must see)

Located in the central highland city of Antananarivo, the Rova occupies the highest point on Analamanga, formerly the highest of Antananarivo's many hills. Merina king Andrianjaka, who ruled Imerina from around 1610 until 1630, is believed to have captured Analamanga from a Vazimba king around 1610 or 1625 and erected the site's first fortified royal structure. Over time, the number of buildings within the site varied. Andrianjaka founded the Rova with three buildings and a dedicated tomb site in the early 17th century.

Manjakamiadana was built in two stages. The original palace, built between 1839 and 1840 on the orders of Ranavalona I, was built entirely in wood by Jean Laborde. On the night of 6 November 1995, a fire broke out in the Rova compound, destroying or severely damaging all of its buildings. The original exterior of Manjakamiadana comprised over 70,000 granite stones, of which approximately 20,000 had become cracked during the fire and needed replacement.

2) The Andafivaratra Museum (must see)

The Andafivaratra Museum is a true heritage complex, located at the top of the Haut-Ville neighbourhood. The palace belonged to Prime Minister Rainilaiarivony, who was smart enough to marry three heir queens in a row and virtually rule the country from behind the righteous throne. It is a beautiful pink palace built in Baroque style. The furniture, portraits and other things that belonged to the king and his queens (Queen Ranavalona, Queen Victoria) are still there. The exhibits are described in English and French. There is also an immense throne, a crown and jewels and other valuable objects and clothes that can be seen.
Image Courtesy of Wikimedia and Bernard Gagnon.
3

The Roman Catholic Archdiocese of Antananarivo was established in 1841, with a beautiful widely-paved driveway. The cathedral is built in Gothic style. The face is decorated with stained-glass rosette window, flanked by gabled bell-towers. The interior is largely designed with decorative painted walls. The side-wall, stained, flamboyant windows have an attractive form and pretty colours and the ceiling is covered with hardwood, painted in blue shades that suggest the azure skies. Outside the building there is a grotto of the Lady of Lourdes.
Image Courtesy of Wikimedia and Chad Teer.
4

The Anosy Lake is the municipal lake located in the centre of Antananarivo, a few minutes from the Mahamasima Stadium. It's surrounded by beautiful Madagascar jacaranda trees. There is a trail leading to the middle of the lake, where there is a memorial established in honour of the Malagasy soldiers who participated in WWI, defending France. It's called "The Black Angel" and is decorated with laurels.
Image Courtesy of Flickr and Olivier Lejade.
5

The Ambohitsorohitra Palace is a presidential palace in the capital of Madagascar, Antananarivo. It has only a symbolic role and is not a residence of the president.
Image Courtesy of Wikimedia and Savateuse (Julie Gabriel).
Sight description based on Wikipedia.
6

The Pirates Museum of Antananarivo is located close to the central railway station. Here the visitors can learn about the history of old Madagascar. Approximately 300 years ago, pirates discovered for themselves this yet uncolonized island and it quickly became their secret hideout land. Now the museum has records of the detailed stories and keeps various artifacts, original and replicas.
Image Courtesy of Flickr and Mykl Roventine.
7

The Railway Station is an old construction and has been neglected for a while but it was still in need of restoration. The building bears 19th century colonial features. So it was restored in 2008. You can find some useful boutiques and a tourist office. Outside you will find a nice Café de la Gare, where people used to kill time while waiting. Outside the building, in the parking area, you can find other boutiques where you can buy precious stones from the merchants.
Image Courtesy of Wikimedia and Olivier Lejade.
8

The Faravohitra Church is a Roman Catholic Church built in 1870 by architect Cameron. The building was dedicated to John the Baptist. It is located in the Haut-Ville. Built in terracota brick, the church bears Romanesque features, especially noting the arched windows, and it is remarkable from a distance for its high-gabled bell tower, decorated by clocks on either side of it.
Image Courtesy of Wikimedia and Bernard Gagnon.

Create Your Own Walk in Antananarivo

Creating your own self-guided walk in Antananarivo is easy and fun. Choose the city attractions that you want to see and a walk route map will be created just for you. You can even set your hotel as the start point of the walk.

Shopping in Antananarivo is lots of fun, and you can choose the most eye-catching products that are sold. There are many shops and markets where merchants come from all over the country to sell their goods. You can also meet people selling interesting, bizarre, handmade goods on the roads. Take this tour guide to enjoy the most popular shopping places in Antananarivo.