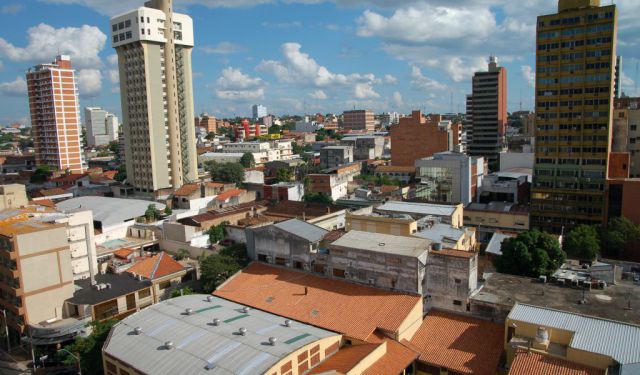 Sitting on the bank of the Paraguay river, the capital of Paraguay Asunción is a beautiful city, well worth being explored. Local attractions are plentiful and include, among others, numerous sites of colonial and modern architecture, such as the López Palace - seat of the local government, theaters, plazas, museums and more. To see them all, follow this orientation walk and enjoy!
Image Courtesy of Flickr and alex-s.
How it works: Download the app "GPSmyCity: Walks in 1K+ Cities" from iTunes App Store or Google Play to your mobile phone or tablet. The app turns your mobile device into a personal tour guide and its built-in GPS navigation functions guide you from one tour stop to next. The app works offline, so no data plan is needed when traveling abroad.

Located along the river, Puerto de Asuncion is river terminal that serves as a transportation center for most of the freight entering or leaving the country. Although the port was originally privately owned, the government has possessed it since 1940. While port areas in cities around the world have the reputation of being dangerous places to visit, Asuncion's port is relatively quiet and safe. Here you can admire the magnificent La Bahia de Asuncion and many other colonial houses.
Image Courtesy of Flickr and kloncy.
2

Situated in the town plaza overlooking Asuncion Bay, Palacio de los López is one of the most beautiful and imposing buildings in the city. Built in 1772 and completed in 1892, it was designed in the Neo-classical style. It has wide staircases, verandas, and continuous arches that loop all the way around the top floor balcony. The main body of the palace is flanked by two wings that form a squared “U” shape. At the center of the palace, a lookout tower soars two stories above the roof.
Image Courtesy of Flickr and lett -/\=.
3

In a model for urban planners everywhere, the city of Asunción combined this manzana (block) of nine historic houses near the river into a pleasing cultural center. The oldest of these, the 1764 Casa Viola, the name by which many Asunceños refer to the complex, serves as a small city museum called the Museo Memoria de la Ciudad. The Casa Emasa, once a customs office, now houses La Galería, the center's art gallery. The 1914 art nouveau Casa Clari, the newest house, is the complex's café.
Image Courtesy of Flickr and Rozhi0.
4

Nowadays it houses the Museo Memoria de la Ciudad, a museum in commemoration of the city, and exhibits texts, maps, objects, paints, graphics, as well as other elements that tell the history of Asunción, since its foundation until modern times.

Image Courtesy of Flickr and gilooo.
Sight description based on Wikipedia.
5

Nowadays there are two exhibition rooms: Juan A. Samudio and Domingo Martínez de Irala. There is also a playroom for the kids. In the garden of the house is named Patio Arecayá in commemoration of the Arecayá Indian rebellion, and is used for various outside activities.

Image Courtesy of Wikimedia and Casalin c.
Sight description based on Wikipedia.
6

Situated on the corner of Presidente Franco and 14 de Mayo Avenues, Independence House is the town's oldest edifice. It is a national landmark, which has great historical significance. Built in 1772, it was designed in the Colonial style, with a thatched roof, bamboo framework, and walls made of adobe brick. Since 1965, it has housed a small museum, which displays furniture, old coins, and documents that provide a glimpse into Asuncion's past.
Image Courtesy of Flickr and Ever Daniel.
7

Located in the historic center of Asuncion, Palacio Legislativo is the only post-modern building in the city. Opened in 2003, architect Gaetano Moretti designed the building. The structural form of the building is often compared to a truncated cone. The palace houses the boardrooms of Congress, the House of Representatives and VIP rooms. The Main Hall is one of the most significant areas of the building and serves as a venue for cultural events and activities, including permanent exhibitions of art. The downtown area of Asunción can be seen from the terrace of Palacio Legislativo. In addition to the view, the palace provides a great opportunity to learn more about the traditions and culture of Asuncion.
Image Courtesy of Wikimedia and Roblespepe.
8

Situated along Asuncion's Independence Square, El Cabildo was used to house Parliament until 2004. Today it serves as a cultural center and features impressive collections that are centered around Paraguayan musicians and famous national figures in the field of literature, theater and dance. It also has a large library and art gallery and is a great place to learn about the history of the city.
Image Courtesy of Wikimedia and Jan Pešula.
9

Located in the center of the city, Teatro Municipal Ignacio Pane is a modern-style theater with beautiful architecture. Built in 1843 under the consulate of Don Carlos Lopez, it can accommodate 700 people. It is a popular venue for opera, ballet, and other performing arts. From 1997 to 2006, the theater underwent an extensive renovation project. It has since re-opened and is once again at the center of Asuncion's cultural scene.
Image Courtesy of Wikimedia and Patty P.
10

Built in 1961, Hotel Guarani occupies an entire city block. It is located in the heart of the administrative, legal and commercial part of town. The hotel is considered a symbol of Asuncion and South America. It was the first five-star hotel in Asuncion and for many years was the main point of reference when navigating the city. The hotel was renovated in 2008 and today has a crisp modern look that still pays tribute to its original 1960s design.
Image Courtesy of Wikimedia and Felipe Antonio.
11

Originally built in 1687, Catedral Metropolitana was reconstructed in the middle of 19th century. Designed by architect Carlos Zucchi, the cathedral is noted for its huge golden altar and religious art. The cathedral's altar is decorated with Jesuit and Franciscan silver and is enchanting to the eye.
Image Courtesy of Wikimedia and FF MM.
12

Located in the center of the city at the intersection of Caballero and Eligio Ayala Streets, Edificio Aurora stands 95.8 meters tall and has 27 floors. Opened in 1978, the Aurora was the tallest building in Paraguay during the 1980s. It is a residential apartment building, although the Headquarters of Migration is located on the ground floor. The building boasts a magnificent entrance and stunning foyer, as well as brightly-colored balconies.
Image Courtesy of Wikimedia and FF MM.
13

Built in 1861 by English architect Alonzo Taylor, Estacion del Ferrocarril is Asuncion's stunning railway station. Construction occurred under the rule of President Don Carlos Antonio López. The station's Neo-Gothic towers blend in well with the surrounding architecture. The balustrade above the cornice is a recent addition.
Image Courtesy of Flickr and Lorenzo Zucchi.
14

Plaza Uruguaya is an interesting city park that provides a pleasant respite from the city's heat. A covered market that offers a great collection of Latin American literature is located within the park, as well as an old railway station, shuttered since the interruption of rail service years ago. In the terminal you can see a remarkable old steam locomotive, the Sapucaí, which is no longer in use. Visit the park to get a better sense of the true Asuncion.
Image Courtesy of Wikimedia and Arthuro SantaCruz.
15

The works acquired by Juan Silvano Godoi come from artists of the 17th century, Italian and French half of 19th century, creators of Argentines who acquired some significance in subsequent decades and, of course, a whole generation of painters Paraguayans: Andres Campos Cervera, Carlos Colombino , Juan Samudio, Jaime Bestard, Holden Roberto Jara, Pablo Alborno, Modesto Delgado Rodas and Ignacio Núñez Soler, representatives of a school still in its infancy, but vibrant forces and energies.
Image Courtesy of Wikimedia and Casalin c.
Sight description based on Wikipedia.