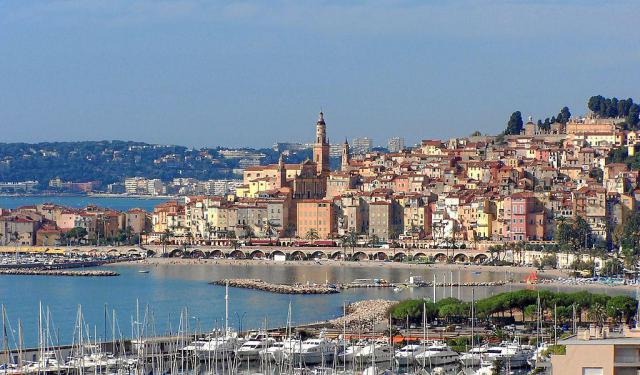 Initially a Roman camp, Le Suquet is Cannes' old town quarter and the original site of the city. With its medieval buildings and a castle on top of the hill, it offers an incredible contrast to the glamor of the Croisette Boulevard. Take this self-guided walking tour to experience a bit of quiet and charming part of Cannes.
Image Courtesy of Wikimedia and Berthold Werner.
How it works: Download the app "GPSmyCity: Walks in 1K+ Cities" from iTunes App Store or Google Play to your mobile phone or tablet. The app turns your mobile device into a personal tour guide and its built-in GPS navigation functions guide you from one tour stop to next. The app works offline, so no data plan is needed when traveling abroad.

The Old Port of Cannes offers both a historical site and a modern delight. You'll see classic sailboats at anchor and modern yachts hosting celebrities. Visitors can wander through the marina and admire the luxury yachts.

The port has been an important part of Cannes' history. It was used as a fishing village and a port of call between the Lerins islands millennia ago. First, ancient Italians occupied this area, and then the Romans. As the primary source of transportation was shipping, the port was constantly in use, bringing settlers and providing the economic heart of the area.

The Cannes Ferris Wheel is set up each summer, and visitors can enjoy a relaxing ride while taking in spectacular views.

The Laubeuf and du Large seawalls were renovated in 2018 and re-christened as the Joséphine Baker jetty. Baker was an inspiring artist from the World War II era.

This lovely jetty offers families and walkers a fantastic way to enjoy a 360-degree view of the incomparable Bay of Cannes. Visitors can also see the Lérins Islands. This jetty is accessible so guests with reduced mobility can enjoy this special place.

The Old Port hosts the Yachting Festival each year, which turns this area into an even busier and more vibrant destination. Sparkling new mega yachts, electric boats, and multihulls are displayed in this one-of-a-kind location.

The neoclassic-style building that houses the City Hall of Cannes looks more like a palace than a City Hall.

The first communal house existed in the area as far back as 1515. However, that original building fell into disrepair after the French Revolution. The current building was completed in 1876. Also known as the Hôtel de Ville, the building was designed by architect Louis Durand.

The majestic building features 16 caryatids and sculpted blazons that embellish the facade. Doric and Ionic columns add to the grandeur of City Hall. An iconic dome with two clocks tops the building.

The building is located right at the port in the old part of Cannes. In front of it, along Pantiero promenade, is the Memorial of the Fallen. This monument to the First World War was erected in 1927 and was created by sculptor Albert Cheuret.

The view of the monument and the city hall behind it is one of the most photographed scenes in Cannes. The stately and sedate monument frames the grand city hall beautifully.
Image Courtesy of Wikimedia and Txllxt TxllxT.
3

Forville Market is Cannes' favorite market and offers organic vegetables, local wine, fresh fish, and fresh flowers for the table. It's only open in the morning, so stop by before lunch.

The market is pedestrian-only, so it is a safe and easy place to walk through and focus on the goods instead of being distracted by traffic. Locals love to come here and buy up their daily produce.

Forville Market offers single-ingredient and prepared foods, so you can mix and match offerings to come up with a delicious picnic lunch or tasty dinner. If you're looking for cold meats, you'll find tripe sausages, ham, and dried sausage. If you're looking for a ready to eat to heat meal, try takeaway paella.

Visitors craving Italian food will also find plenty to celebrate. Ravioli Niçois and polenta are a few of the Italian foods you'll find. Fresh produce abounds. Shop for strawberries in spring, tomatoes in summer, and leeks in winter.

Locals like to arrive early and taste market offerings as they shop. The market opens at 7 am and gets busier and busier as the morning goes on.

On Mondays, the food market is replaced by an all-day flea market.
Image Courtesy of Wikimedia and MOSSOT.
4

The Painted Walls of Cannes offers visitors a unique way to see depictions of their favorite movie stars and movie scenes. Since Cannes began hosting the Cannes Film Festival in 1949, Cannes has been synonymous with movie star glamour. Since 2002, artists have painted various murals to celebrate Cannes' cinema connection. Today, there are 15 different mural frescoes to view.

These inspired murals encourage visitors to stroll through Cannes, searching for the next mural. The Painted Walls offer a unique combination of a free outdoor art gallery and a treasure hunt.

As you stroll through the city, you'll find murals depicting Buster Keaton, James Dean, and Marilyn Monroe. One mural depicts Pulp Fiction and another mural shows The Piano Lesson.

One of the most prominent murals features depictions of 100 years of movie stars. This impressive mural is next to the bus station near City Hall. This artwork celebrates cinematic greats such as Charlie Chaplin, Alfred Hitchcock, Micky Mouse, and even memorable characters like Superman, Batman, and R2-D2.
Image Courtesy of Flickr and HarmonyRae.
5

5) Notre Dame d'Esperance (Our Lady of Hope Church) (must see)

Construction on this historic church began in 1521. After over a hundred years of work, it was completed in 1627 and dedicated to Our Lady of Hope in 1645.

The church's location at the top of Suquet Hill offers beautiful views of the city below.

The church is Gothic, while the porch is Renaissance-style. Our Lady of Hope Church has several chapels, including a chapel dedicated to the patron of Cannes, Saint Nicolas. In the Saint-Pierre chapel, visitors will find an elaborate carved wooden altar.

A beautiful 16th-century gilded wood statue of Our Lady of Hope stands above the high altar. A central stained glass window represents the Annunciation.

Visitors will find a rare Burgundy sculpture dating to the 14th century in the chapel baptismal font. A 15th-century statue represents Saint Anne. The grand Italian organ dates to 1857 and enthralls the faithful with its beautiful tones.

The bell tower features Romanesque architecture. Its five bells were all cast in 1921. Near the entrance to the church, visitors will find a gorgeous small garden, perfect for quiet contemplation.

Our Lady of Hope Church offers beautiful architecture and a picturesque setting. Looking down to the Riveria, the view is stunning.

The climb up the church is steep, so be prepared. In July, the church is a venue for Suquet Music Nights, a magical event featuring classical music, piano players, and singers.
Image Courtesy of Flickr and Jorge Láscar.
6

This museum was formerly known as the Castre Museum and re-named the Museum of World Explorations in 2021.

The Museum of World Explorations is situated in the medieval castle formerly used by the monks of Lérins. In 1877, Baron Tinco Martinus Lycklama to Nijeholt bequeathed his collection to the City of Cannes. The collection includes antiques and primitive art.

In 1919, the City of Cannes acquired buildings in Le Suquet to house the collection in the museum. The ancient buildings are the perfect setting to explore this treasured collection.

The collection includes art and artifacts from the Arctic, the Himalayas, and Oceania. Visitors will also find pre-Colombian ceramics and Mediterranean antiques.

Visitors can admire a beautiful Mediterranean garden. Once inside the museum, visitors can access the inner courtyard and the watchtower. Energetic view seekers can climb the 109 steps to the top of the tower. From the top, admire the 360-degree view of Cannes below.

The Man in the Iron Mask was a prisoner during King Louis XIV region. He was confined to various French prisons--including the infamous Bastille. The man wore a black velvet mask covering his face, and his identity has never been discovered.

The Man in the Iron Mask escaped from Sainte-Marguerite Island and found sanctuary in this 12th century "Mask Tower" for the last years of his life. The story was made famous by writers Alexandre Dumas and Voltaire. In Voltaire's retelling, the man wore an iron mask. Historical records show that the man wore a velvet mask, but Voltaire's version has proved popular.

Historians have many guesses over the man's identity, but none of these theories have been definitively proven. Some stories claim that the man was a relative of the King--an older brother, a twin, or his illegitimate father.

Documents from the man's jailer, Saint-Mars, were discovered in 2015. A leading theory supposes that the man was Eustache Dauge, who was involved in political scandals.

One legend says that the unnamed man's host haunts the tower. Whether or not this is true, the legends and speculations concerning the man's identity continue.

Today, a plaque on the 12th-century tower and a nearby dummy mark the location. The plaque reads, "Passer-by, stop to meditate on the sufferings of this torture."
Image Courtesy of Wikimedia and M.Strīķis.

Create Your Own Walk in Cannes

Creating your own self-guided walk in Cannes is easy and fun. Choose the city attractions that you want to see and a walk route map will be created just for you. You can even set your hotel as the start point of the walk.

Cannes is a sparkling resort city on the enduringly fabulous French Riveria. First, Ligurians occupied Cannes, then Phocaeans, Celts, and Romans. By the fourth century, Lérins monks settled the area. Napoleon camped here after his return from Elba. Lord Brougham built a villa here and popularized Cannes as an international resort destination in the 19th century. Today, the area is known for...  view more