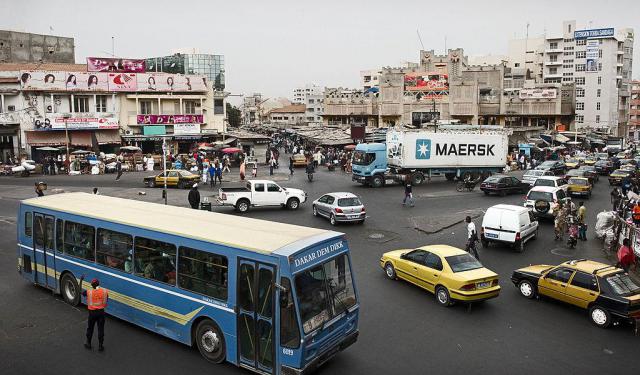 The city of Dakar, capital of Senegal, is a home to many notable sights, most of which are clustered in the Downtown area, including religious sites, such as the Grand Mosque with its towering minaret; a number of museums, including Dakar's largest Musée Théodore Monod displaying cultural artifacts illustrating diversity of Senegalese traditions and history; and more. On this walking tour you have a chance to explore some of the top attractions of Downtown Dakar.
Image Courtesy of Maersk Line.
How it works: Download the app "GPSmyCity: Walks in 1K+ Cities" from iTunes App Store or Google Play to your mobile phone or tablet. The app turns your mobile device into a personal tour guide and its built-in GPS navigation functions guide you from one tour stop to next. The app works offline, so no data plan is needed when traveling abroad.

Place de Soweto is the downtown square of Dakar. The square is home to a popular statue representing an Afro-American woman and man, holding each other's hands. The square is surrounded by the IFAN Museum of African Arts and the National Assembly of Senegal. The Place de Soweto is one of the most popular places in Dakar.
Image Courtesy of Flickr and Moises.on.
2

The museum is part of the Institut Fondamental d'Afrique Noire (IFAN) institute, founded 1936 under the Popular Front government in France. When IFAN was transferred to Cheikh Anta Diop University in 1960, the building at Place Soweto near the National Assembly of Senegal was converted into a museum. It is today one of the most prestigious centers for the study of African culture and part of the Cheikh Anta Diop University. As the main cultural research center of the colonies of French West Africa, it contains important collections from across Francophone Africa. The museum is one of the regular locations used in the Dakar Biennale exhibition, showing art by contemporary African and diaspora artists.

Image Courtesy of Wikimedia and Ji-Elle.
Sight description based on Wikipedia.
3

Cathédrale du Souvenir Africain de Dakar is the largest religious space in Dakar. Built on the site of an ancient cemetery, the cathedral was consecrated by Cardinal Verdier in February 1936. Its Sudan-style towers, Byzantine domes and Sudan sandstone are combined with English granite, creating of the cathedral a splendid landmark. The cathedral is topped with a large dome distinctive for its 20 windows in Greek style. Its entrance features the inscription "To the Virgin Mary, Mother of Jesus the Savior."
Image Courtesy of Wikimedia and Manu25.
4

Palais de la République is a historic building which served as the home of the General Governor of the French West Africa federation and is now the home of the president of Dakar. The construction of the palace started in 1902 under the order of Gaston Doumergue. The palace was built in Neo-Classical style, topped with a tower inspired by the Trocadero of the Palais de Chaillot in Paris. The construction of the palace lasted 5 years and on 28 June 1907 it was inaugurated as the Government Palace. With the success of the last governor Pierre Messmer during 1958-1959, the palace underwent many renovations, these giving the palace its current appearance.
Image Courtesy of Wikimedia and Bernard bill5.
5

Marche Sandaga is the largest market in Dakar. It occupies a three-story building, its vendors selling everything from fruits and vegetables to fabrics and electronics. You will also have the opportunity to buy a variety of handicrafts and souvenirs. Outside the market, the avenue Emil Badiane is also filled with vendors, selling anything that will acquaint you with Senegal's culture and traditions.
Image Courtesy of Flickr and IAN RANSLEY DESIGN + ILLUSTRATION.
6

The Dakar Grand Mosque is one of the most important religious buildings in the capital of Senegal. It is situated on Allée Pape Gueye Fall. Designed by French and Moroccan architects, The Grand Mosque was opened in 1964 by Hassan II, King of Morocco and Senegalese President Léopold Sédar Senghor.

Richly decorated on the interior and exterior, it is stylistically similar to the Mosquée Mohammed V in Casablanca. It's minaret rises to 67 meters.

Created in 1964 and situated in the enceinte of the Grand Mosque, the Institut islamique is a public institution under the direction of the Senegalese Minister of Education, dedicated to Islamic research and teaching. The library of the Institute, named for prince Naef Ben Abdelaziz Al-Saoud was opened 9 October 2004.

Image Courtesy of Wikimedia and Ixtla.
Sight description based on Wikipedia.
7

Porte du Troisième millénaire is a modern monument in Dakar. It symbolizes the African continent at the crossroads of the millennia. The monument is 16.50 m in height, and is actually a silhouette facing the sea in combination with three doors, each with a message, surrounded by three baobab trees offered by King Fahd and a pool- its water symbolizing life. The statue was inaugurated in 2001, and was designed by the Senegalese architect Pierre Goudiaby Atepa.
Image Courtesy of Wikimedia and Erica Kowal.

Create Your Own Walk in Dakar

Creating your own self-guided walk in Dakar is easy and fun. Choose the city attractions that you want to see and a walk route map will be created just for you. You can even set your hotel as the start point of the walk.

The city of Dakar, capital of Senegal, is a home to many notable sights, most of which are clustered in the Downtown area, including government buildings, art galleries, historic squares and a railway station. On this walking tour you have a chance to explore some of the top attractions of Downtown Dakar.