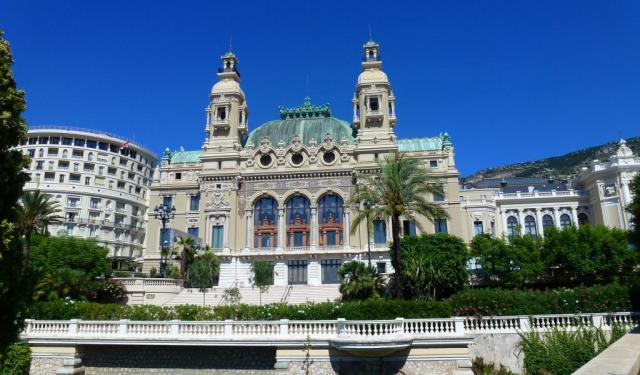 Monaco – the world’s second smallest state – is also one of the world’s richest. The latter fact definitely shows in the historic buildings – famous casinos, opera house, hotels and opulent palaces – found in the central ward Monte-Carlo, displaying a range of architectural styles quite wide for a small country like this.

The geography of Monaco, featuring sharp hills and narrow coastline, has largely determined the Monacan architecture. It is also attributed to the city-state's location in the South East of France, which has entailed strong French influence, especially that of the Belle Époque period. Notable Monacan works by French architects Charles Garnier and Jules Dutrou epitomize the mixture of other European and historical influences.

A host of architectural landmarks of the Principality allow visitors to learn the history behind its current-day glitz and glamour. Collated here are some of the major local edifices worth checking out; such as:

Cafe de Paris and Casino – the top place in Monaco for high-end gambling since 1868; the most recent renovation in 1988 gave the Cafe a Belle Époque style mimicking Parisian bistros from the early 1900s.

Casino de Monte-Carlo – perhaps the world's most famous gambling establishment, operational since the 1850s; the ornate structure is an outstanding example of Beaux-Arts style.

Hotel de Paris Monte-Carlo – a luxury hotel built in 1863; among other amenities, offers the best view of the Monte Carlo Casino and the sea, plus several Michelin-star restaurants.

To explore these and other historically important architectural sights of Monte-Carlo, take this self-guided walking tour.
Image Courtesy of Wikimedia and otterboris.
How it works: Download the app "GPSmyCity: Walks in 1K+ Cities" from iTunes App Store or Google Play to your mobile phone or tablet. The app turns your mobile device into a personal tour guide and its built-in GPS navigation functions guide you from one tour stop to next. The app works offline, so no data plan is needed when traveling abroad.

Cafe de Paris and Casino date back to 1868. The most recent renovation in 1988 gave the Cafe a Belle Époque style that mimics many Parisian bistros from the early 1900s. The cafe features two modular terraces with views of the nearby hotel that has impressive antique cars on display.

If you enjoy high-end gambling, Cafe de Paris and Casino is one of the top places to go in Monaco. There are over 140,000 sq. ft. of gaming rooms, giving you plenty of opportunities to enjoy the games that you want. The gaming area's setting has been inspired by the Historic Grand Prix.

When you dine here, you'll be enjoying an exciting brasserie setting. Some of the most popular types of foods include pasta, fresh fish, beef dishes that include steak tartare and veal, and delicious desserts including pastries. There is also a full alcohol menu offering everything from wine to cocktails.

Image Courtesy of Wikimedia and Mister No.
2

The Monte Carlo Casino is perhaps the world's most famous gambling venue, owned and operated by the Société des bains de mer de Monaco. At some point, in the 1950s, it was controlled by Aristotle Onassis.

The idea to open a gambling business in Monaco came from Princess Caroline in the late 1840s. She saw this as a chance for the Principality to avoid bankruptcy after the loss of tax proceeds from the breakaway towns of Menton and Roquebrune.

In the 1850s, Monaco was not much of a fancy place. It didn't have sufficient road link to the neighboring Nice and the rest of Europe, no suitable accommodation or any other amenities for visitors. The casino changed several managers before it started to gain profit, in 1859.

In 1863 it was taken over by François Blanc who had used his entrepreneurial skills to raise a required capital for a massive development of the area, launched in 1858. Among those who first invested in the project were Bishop of Monaco and the future Pope Leo XIII. The new casino complex, designed in a distinct Beaux Arts style by architect Charles Garnier, author of the Paris Opéra building, was finished in 1863. The area, previously known as Les Spelugues (The Caves), was renamed to Monte Carlo in honor of Prince Charles, the then ruler of Monaco. In 1879, an opera and ballet theatre, known as the Salle Garnier, was added to the complex.

For many years, the Monte Carlo Casino remained the key source of income for Monaco's economy, yet its own citizens have always been banned from gambling. It is for this reason that all visitors to the casino must present their IDs to ensure that no locals get inside.

A lot of fictional, as well as factual, peculiar events have been associated with the Monte Carlo Casino over the years. Among them the James Bond movies, partially set in and filmed on the location, and the Monaco Grand Prix (the Circuit de Monaco) Formula-1 race, passing by the casino building each year.

The Hôtel de Paris Monte-Carlo was opened in 1863 as part of the development of Monaco by the Société des Bains de Mer (SBM) under the auspices of Charles III of Monaco. It has undergone a $280 million and more than four years complete renovation and reopened in March 2019. Among Monaco's luxury hotels, it has the best view on Monte Carlo Casino and the sea.

The hotel has notable restaurants, including the Michelin 3-star Louis XV - Alain Ducasse à l’Hôtel de Paris, Michelin-starred Le Grill, the Omer restaurant (second restaurant of Alain Ducasse), as well as the Le Bar Americain, which is listed on WorldsBestBars.com.

The hotel has been featured in numerous films, including Confessions of a Cheat (1936), The Red Shoes (1948), Iron Man 2 (2010), Monte Carlo (2011), and two James Bond films; Never Say Never Again (1983) and GoldenEye (1995). It was also portrayed in the 2012 animated film Madagascar 3: Europe's Most Wanted. It was a popular shooting location for photographer Helmut Newton.
Image Courtesy of Wikimedia and Jordiferrer.
Sight description based on Wikipedia.
4

The Opera de Monte-Carlo, also known as the Salle Garnier, is an opera house, which is part of the Monte Carlo Casino located in the Principality of Monaco. It opened in 1879 by then ruling Prince of Monaco, Charles III, who thus sought to diversify the Principality's cultural life. Initially, it served as the Prince's private theatre and its main entrance was reserved for the royal family.

The opera house took eight months to build and was designed by architect Charles Garnier who was also responsible for the construction of the Palais Garnier in Paris. Hence the resemblance between the Salle Garnier and its Paris sibling, being an exact but smaller copy, with only 524 seats, of the latter. Both buildings reflect a Belle Epoque style.

The inauguration of the Salle Garnier took place on 25 January 1879 with a show featuring Sarah Bernhardt, clad in a nymph costume. Since then, the theatre has hosted 45 world premieres, including Hector Berlioz's “La damnation de Faust” in 1893, Saint-Saëns's “Hélène” (1904), Mascagni's “Amica” (1905), and Puccini's “La Rondine” (1917). It also saw the very first performance, in January 1894, by Italian tenor, Francesco Tamagno, of Verdi's Otello, as well as many other 20th century opera greats, such as Nellie Melba and Enrico Caruso (in “La bohème” and “Rigoletto”, 1902), and Feodor Chaliapin in the opening spectacle of “Don Quichotte”, by Jules Massenet, in 1910.

Today, the Opéra presents five to six operas during a season. It was transformed for the third time on 27 July 2013 to host the Love Ball, a fundraising gala event organised by the Naked Heart Foundation.

Why You Should Visit:
The setting alone is worth a visit, and the facade will already impress any visitor here.
The interior is spectacularly ornate with drapes of red velvet, lots of gold leaf, bronzes, friezes and crystals everywhere.
If you're a fan of architecture & design, this is a must – especially if you get to see it in use!
Image Courtesy of Wikimedia and Robin.
5

The Hotel Hermitage Monte-Carlo is a palace style Belle Époque in the heart of Monte Carlo. It was built at the beginning of the 20th century, designed by Monegasque architect Jean Marquet. It is a large, upscale and luxurious structure, with a neoclassical edifice towards the Mediterranean Sea.

The Hotel is also a famous example of the Monacan Belle Époque movement. The features are elegant, with understated refinement. The ceiling of the dining room, which is ironically named 'Belle Époque', was designed by Gabriel Ferrier. The Winter Garden was designed and created by Gustave Eiffel, who used glass conservatory and erected disciples to combine classic authenticity and technology. The Winter Garden consists of soft pastel tones, grand lighting and a fountain.

Architect Joseph Lori renovated the Hotel, elevating it two more levels, and rejuvenating the classic Belle Époque style, in the Prince and Beaumarchais wings in particular. Following this renovation, the Hotel Hermitage was made a 'listed building', and awarded the Renaissance Trophy for the "most elegant period decor" by the Gault and Millau Guide.
Image Courtesy of Wikimedia and Håkan Dahlström.
Sight description based on Wikipedia.
6

Saint-Charles is a landmark church in Monte Carlo. It was built from 1879 to 1883, under the reign of Prince Charles, and was designed by architect Charles Lenormand in a French, neo-Renaissance style. The church honors St. Charles Borromeo, who was the patron saint of the Prince.

It stands on the site previously occupied by the chapel of Saint-Laurent, on the land once owned by the affluent Blanc family. Initially a chapel, the Saint-Charles was made a parish church in 1887.

Relatively small in size, the building is distinct for its bell tower, rising to 108 feet above sea level and topped by a cupola. Somewhat simple on the outside, the interior is grand with 19 masterly crafted stained glass windows and 17th century carvings, brought over from the church of Saint-Nicolas in Monaco Town, prior to its being replaced by Monaco Cathedral. Other highlights include 17th century gilded wooden altar, adorned with cabled columns, statues of saints and sculpted images of Christ; and the Virgin Mary altar, highly praised for its artistic value at the Vienna Exhibition.

The church has a strong musical tradition and hosted many choir recordings over the years. It has an organ, produced by M.Merklin, dating back to 1884.
Image Courtesy of Wikimedia and Aimelaime.

Create Your Own Walk in Monte-Carlo

Creating your own self-guided walk in Monte-Carlo is easy and fun. Choose the city attractions that you want to see and a walk route map will be created just for you. You can even set your hotel as the start point of the walk.

Situated on a prominent escarpment at the base of the Maritime Alps washed by the Mediterranean Sea, the district of Monte Carlo is an administrative center of the tiny Principality of Monaco.

The latter owes its name to the nearby 6th-century BC Greek colony, seemingly linked to the Greek hero Hercules who visited the area and built here a temple – a sole structure, back then – which came...  view more