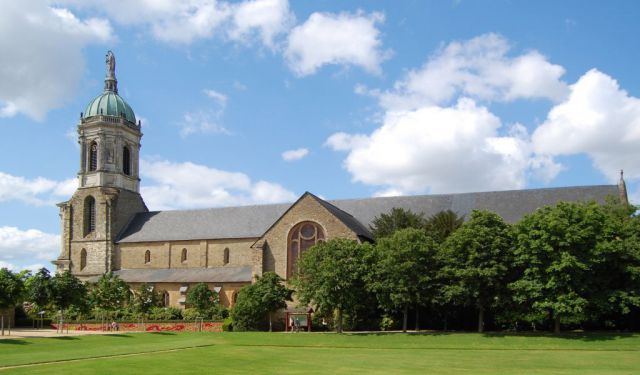 Rennes is a city rich with religious heritage and has plenty to offer for the travelers who are interested in religious history and architecture. Among the most important religious sights, you will find the Rennes Cathedral, Saint-Yves Chapel, Jacobite Convent, and more. Take this self-guided walking tour to see the historical churches standing tall in Rennes today.
Image Courtesy of Wikimedia and Pline.
How it works: Download the app "GPSmyCity: Walks in 1K+ Cities" from iTunes App Store or Google Play to your mobile phone or tablet. The app turns your mobile device into a personal tour guide and its built-in GPS navigation functions guide you from one tour stop to next. The app works offline, so no data plan is needed when traveling abroad.

Rennes Cathedral is a Roman Catholic cathedral, located in the town of Rennes. It is a historic monument since 1906. It is the seat of the Archbishops of Rennes, previously Bishops of Rennes. The site has been used for a cathedral more or less from the beginnings of the see in the 6th century. The earliest building was completely replaced by a Gothic cathedral in the 12th century, of which in 1490 the tower and the entire west front collapsed. The existing façade with its neoclassical granite towers in four stages was constructed over the next two centuries or so, with long gaps between the different stages: the lowest level was built between 1541 and 1543, the second from 1640 to 1654 (by Tugal Caris), and the fourth (by Pierre Corbineau) from 1654 to 1678. Yet another architect, François Hoguet, completed the towers, between 1679 and 1704, at their present height of 48 metres and added the device of Louis XVI between them.

The nave and choir however had not been restored. During vespers on 11 February 1754 a great stone fell from the roof of the choir, and it was decided, before the entire body of the cathedral collapsed, to demolish all these parts and rebuild them. The demolition was carried out between 1756 and 1768, leaving only the towers and west front standing. Rebuilding began in 1787, shortly after which the French Revolution began and all work was suspended. It did not recommence until 1816, initially under the supervision of the architect Mathurin Crucy. He died in 1826; the work was continued under the local architect Louis Richelot, and finished in 1845. The original decoration was in a plain neo-classical style, but during the 19th century it was extensively refurbished with gilt, stucco and paintings (inspired by those in the Parliament of Rennes) to create a more sumptuous appearance. Characteristic of this cathedral is the contrast between the rich decoration, including, in front of the altar, slabs of rare marble from the Roman Forum, a gift from Pope Pius IX, and the sombre granite of the structure.

Image Courtesy of Wikimedia and Manikandan Bakthavatchalam.
Sight description based on Wikipedia.
2

Located on the corner of Rue Saint-Yves and Rue Le-Bouteiller, Saint-Yves is an old chapel, formerly dedicated to Roman Catholic worship. In 1358, Eudon Le Bouteiller decided to transform his mansion into a hospice dedicated to the holy Virgin and later to Saint Yves. The present chapel was built in 1494 on the site of the old construction.

Since 1945, Saint-Yves Chapel is considered a historic monument. In 1981, it was restored and refurbished to house the office of tourism for the town on Rennes. Its main façade features an impressive arched entrance door, surmounted by three niches. The facade facing the Rue Saint-Yves has four windows, one of which is huge, and a door surmounted by niches as well. The chapel itself is composed of a rectangular nave, which has a vault embellished by engravings dating from the 15th century.

Image Courtesy of Wikimedia and B25es.
3

Located in the heart of the historic city center of Rennes, Church of St. Sauveur is a minor basilica of the Roman Catholic Church, dedicated to Our Lady of Miracles and Virtues. It is said that many miracles have happened within this church. The original construction was in Gothic style, but after its collapse in 1682, it was rebuilt in classical style in 1703. The basilica is particularly noted for its stunning altar canopy, wrought iron pulpit and it's organ. The exterior design of the building recalls, to a lesser extent, that of the Church of the Gesu in Rome or the Notre-Dame-des-Victoires in Paris. The basilica consists of a nave with two aisles, a narrow transept, a choir, and an apse with blunt angles, without ambulatory or aisle.
Image Courtesy of Flickr and xiquinhosilva.
4

The Jacobite Convent, also known as the convent of Bonne-Nouvelle, is a former place of worship and barracks. It contains an abbey, a cloister and some other structures. Today, the convent belongs to the Rennes Métropole, which has plans to turn it into a convention center by 2016. Pierre Rouxel, a citizen of Rennes who made a donation for the construction in 1367, is considered to be responsible for the building of the convent. However, Duke John IV bears the name of founder, as he laid the first stone.
Image Courtesy of Wikimedia and Pymouss.
5

Notre-Dame-en-Saint-Melaine is a French abbey church that served as cathedral during the first half of the 19th century. Between 1803 and 1844, the cathedral of Saint-Pierre de Rennes, demolished in the late 18th century and not yet rebuilt, could no longer be used neither as cathedral nor as sanctuary. Étienne Célestin Enoch, the bishop of Rennes, decided to use the church of Notre-Dame-en-Saint-Melaine as temporary seat of the diocese, which thus became the pro-cathedral. The sanctuary of the church is dedicated to St. Melaine, traditionally regarded as the first bishop of Rennes, who died here in the sixth century. The present building dates from the 17th century and was built in the form of the Latin Cross.
Image Courtesy of Wikimedia and Pline.
6

Saint-Germain Church is a Gothic parish church, located at Rue de Vau Saint-Germain in Rennes. It was built between the 15th and the 17th century, and features the oldest stained glass in Rennes, as well as antique organs. The most spectacular part of the exterior of the church is the south porch, which dates back to the Late Renaissance (1606-1623). It is the work of Germain Gaultier, the first architect of the Parliament of Brittany.
Image Courtesy of Wikimedia and Erwan Corre.