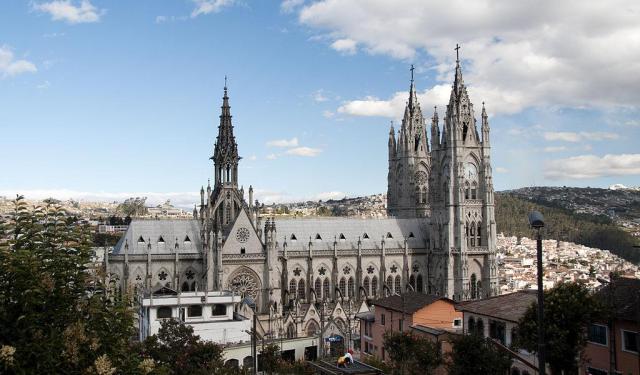 Image by Maros on Wikimedia under Creative Commons License.

A former Spanish colony, Quito is home to literally dozens of Catholic churches. The Spaniards brought their faith with them to Ecuador and built many fantastic churches and cathedrals, one of which pre-dates even the city itself. Take our Religious Sites Walking Tour to see to the most magnificent and impressive houses of worship in the city.
How it works: Download the app "GPSmyCity: Walks in 1K+ Cities" from iTunes App Store or Google Play to your mobile phone or tablet. The app turns your mobile device into a personal tour guide and its built-in GPS navigation functions guide you from one tour stop to next. The app works offline, so no data plan is needed when traveling abroad.

The Santa Domingo Church, or Iglesia de Santo Domingo, was built in the 1580s by the Dominicans, who had arrived to the area in 1541. It features a beautiful chapel with fine decorations, altar pieces, statues and paintings. The founders of the Quito school of painting were responsible for this church's decoration, and there is now a museum in the church where wonderful Quito sculptures and splendid nativity scene are displayed.
Image by cpence on Flickr under Creative Commons License.
2


Image by Diego Delso on Wikimedia under Creative Commons License.
Sight description based on wikipedia
3

The Church and Monastery of St. Francis (Spanish: Iglesia y Monasterio de San Francisco), commonly known as 'el San Francisco', is a 16th-century Roman Catholic complex in Quito. It fronts onto its namesake Plaza de San Francisco. The imposing structure has the distinction of being the largest architectural ensemble among the historical structures of colonial Latin America and for this reason is sometimes known as "El Escorial of the New World". The style evolved over almost 150 years of construction (1534-1680) through earthquakes and changes in artistic fashion. The Church houses the city's beloved Virgin of Quito (1734).

Why You Should Visit:
Just like so many of the churches in Quito – very opulent.
The big front area offers great views of the Panecillo and the city.
The structure itself is beautiful and the courtyard with the toucans is just great.

Tip:
Using one of the guides to get a 45min tour is well worth your time and donation.
The tower is accessible only with a guide, and it gets very tight at times.

The Convent of Merced is an impressive church that stands on the Merced Square. It boasts a solid quadrangular tower with Arabic features and a main elegant dome plus four small domes, all of which contribute to the extremely beautiful exterior of the church. There are also many unique and priceless paintings inside.
Image by Martin Zeise on Wikimedia under Creative Commons License.
5

The El Sagrario Church was built near the Cathedral of Quito in the 1700s. It is not known for sure who was the designer of the church. There is a bell-tower as well as Ionic and Corinthian columns. The screen by Francisco Alban Legarda is a masterpiece, and is one of the best models of baroque style in all of Quito. Inside the church visitors can admire the splendid dome, with frescoes also created by Legarda.
Image by damanule on Flickr under Creative Commons License.
6

Tip:
For a quick fun adventure, get the ticket which includes the domes ($6) and enjoy some seriously claustrophobic short passages up to the roof providing great views across town.
Also, a few really well-priced craft stores in the cathedral are selling alpaca scarves and clothes – you'll regret not buying whilst there as you'll never see better prices.
Image by putneymark on Wikimedia under Creative Commons License.
Sight description based on wikipedia
7

The Church of San Agustín is a church located in Quito. It is one of the seven monumental churches of the 16th and 17th centuries whose main portico was built on stone in the Spanish Baroque-architecture style.

The church includes a small atrium (decorated by a large stone cross), an inside yard with a large garden and a large session hall where the frayers held disertations or "capitulations" of faith. The cloister and convent have a separate entrance which leads to the garden. The bell tower reaches a high of twenty-two meters and houses two bronze bells of the period.
Image by waldopics on Flickr under Creative Commons License.
Sight description based on wikipedia
8

One of Quito's top landmarks is the Basilica del Voto Nacional, also known simply as 'La Basilica'. Like Notre-Dame in Paris, this majestic church is set on a hill and can be admired from anywhere in the city. First built in 1883, improvements continue to be made to the church to this day. Its towers are the tallest in the country. The Basilica is especially beautiful at night when it is illuminated in several colors. Don't leave Quito without seeing this amazing house of worship.

Tip:
From here you get great views of El Panecillo and the Old Town. However, if you're braver, walk across the roof to the tower at the back of the basilica. There are two very steep and narrow metal stairs which take you to the very top of the "back tower". It can be crowded and many people struggle to get up and down but if you have a head for heights it's worth the hassle. The only thing to note is that you cannot get good photos of the Old Town specifically, as the front towers block the view.