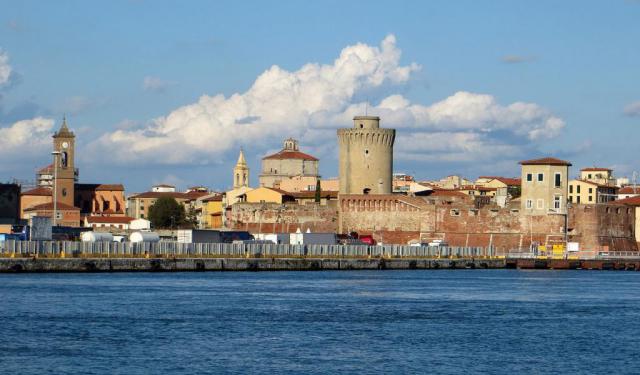 Image by Luca Aless on Wikimedia under Creative Commons License.

Situated along the coast of the Ligurian Sea, Livorno is one of the most important Italian ports, both in terms of commerce and tourism. Livorno’s charming historic streets, beautiful monuments and large squares are picturesque and stunning. The following walk will guide you to the town’s most prominent public places.
How it works: Download the app "GPSmyCity: Walks in 1K+ Cities" from iTunes App Store or Google Play to your mobile phone or tablet. The app turns your mobile device into a personal tour guide and its built-in GPS navigation functions guide you from one tour stop to next. The app works offline, so no data plan is needed when traveling abroad.

Piazza Della Repubblica is a large, historic square built in the 19th century by architects Mario and Luigi Bettarini Chietti. It was a huge project at the time, which encompassed numerous buildings and adjacent streets. This square is also a bridge under which lies a large canal, making it the largest bridge in Europe. A number of monuments of important Italian dukes, including Ferdinand III and Leopold II, are located on the square.
Image by Luca Aless on Wikimedia under Creative Commons License.
2

Located in Livorno’s lovely Venezia Nuova quarter, the 16th-century Fortezza Nuova is a striking red-brick fortress surrounded by the waters of the districts’ canals. Today this fortification is a public place that offers an exciting walk through its old domed halls and underground passages. Cross a small bridge to enter the fortress and enjoy the views of the canals, which are as remarkable as the fort itself.
Image by Anna Saini on Wikimedia under Creative Commons License.
3

Built in the first half of the 18th century, Santa Caterina Church is located on Dominican Square in the historic district of Venezia Nuova. The church's dome, with its authoritarian presence and stern features, served as a prison in Napoleonic times. The church's interior is decorated with religious paintings and there is also a line of wooden frescoes you should be sure to see.
Image by Luca Aless on Wikimedia under Creative Commons License.
4

The "Museum of the City" consists of the former church of the Assumption of the Virgin and of San Giuseppe and the ground floor of the Bottini dell'Olio (Oil Bottles) , which have been connected to each other by a new body of the building, which fits into the void it was created after the Second World War following the demolition of the so-called "Case Pie" complex.

Currently only the contemporary art section can be visited. The internal space of the Bottini dell'Olio has instead hosted temporary exhibitions and exhibitions since 2019.

On the ground floor of the Bottini were the city collections, originally preserved in the deposits of the Giovanni Fattori Civic Museum and the Labronica Library ; it consisted of about six hundred objects of art, in addition to the numismatic and archaeological collections, which traced the history of the city .

The exhibition includes archaeological finds, mainly of the Etruscan and Roman age, which come largely from the collection that Enrico Chiellini donated to the municipality of Livorno in 1883, to the medieval section, where documents drawn up on parchment and frescoes from the Hermitage of Santa Maria alla Sambuca, which preceded the one dedicated to the founding of the city at the end of the sixteenth century, and to its development, strongly linked to the various national communities that animated it, between the seventeenth and nineteenth centuries, ending with a section dedicated to the Risorgimento . There were also spaces for the main Livorno artists (from Leonetto Cappiello to Pietro Mascagni ), for cinema, cooking and satire.

The contemporary art section is located at the church of the Assumption and in the new space adjacent to it. There are exhibited works by Piero Manzoni , Emilio Vedova , Pino Pascali , Tancredi Parmeggiani , Giuseppe Uncini , Enrico Castellani , Vincenzo Agnetti , Giulio Paolini , Emilio Isgrò , Gianfranco Baruchello , Mino Trafeli and others.


Image by Sailko on Wikimedia under Creative Commons License.
Sight description based on wikipedia
5

The striking 16th-century fortress of Fortezza Vecchia stands at Livorno’s old Medici Port. The reinforced walls of the fortification are surrounded by canals. Dating back to the 11th century, Matilde Tower is the oldest part of the fort. Climb up the tower to the top from where you can enjoy stunning views of the town on one side and the port on the other side. Inside the fortress there is a restaurant, a bar and exhibits. Check out this important cultural center and historic symbol of Livorno.
Image by Luca Aless on Wikimedia under Creative Commons License.
6

Porto Mediceo is a fortified quadrangular perimeter once open towards north and is the oldest part of Port of Livorno. It was ordered by Cosimo I who called Bartolomeo Ammannati in 1572 for the project, but the construction was realized after his grand duchy. In the following years Claudio Cogorano, Antonio Cantagallina and Robert Dudley contributed to the project. The project involved the construction of wharfs with defensive walls to connect Fortezza Vecchia (Old Fortress) with the Fanale dei Pisani (Light of the Pisans).

The first wharf has a whole length of 348 meters and was built under Ferdinando I, it is called Molo Ferdinando or Andana degli Anelli. The word Andana had at that time the meaning of vessels moored parallel to a wharf. Molo Ferdinando start from the inlet opening to the Vecchia Darsena (Old Dock), near the Fortezza Vecchia, until the second wharf perpendicular to it. This wharf is called Molo Cosimo or Andana delle Ancore for the reason that was built under Cosimo II. It has a length of 240 meters and finish before to reach the Fanale dei Pisani for the reason that the Sassaia reef blocked the construction. In this place was built a block-house called Fortino della Sassaia (Sassaia Fortress).

The third wharf is the perpendicular extension of the Molo Cosimo built from the Sassaia reef towards north-west, parallel to the coast line, in order to give a repair to the harbour, it is called Molo Mediceo (Medicean wharf) or Molo del Forte (Fortress wharf). It has a length of 470 meters and a width of 250 meters and has at its extremity a fortress, called Fortezza del Molo (Wharf Fortress), once equipped with 27 guns and 200 soldiers in order to defend the port entrance and to maintain the harbour neutrality. It is evident that Porto Mediceo has had at that time an important military and strategic considerations in addition to those of commercial nature as it could accommodate 140 vessels.

Porto Mediceo remained with the plan unchanged until 1853 when was built the Diga Rettilinea. This breakwater, that was not connected to the coastline, had the intent to protect the Medicean Port from the waves coming from north. At the end of the 19th century the Diga Rettilinea was connected to the land and a new dock, called Darsena del Mandraccio was built near Fortezza Vecchia. A new port plan was approved in 1906 and regarded the construction of two breakwaters: the Diga della Meloria and the Diga del Marzocco.
Image by Piergiuliano Chesi on Wikimedia under Creative Commons License.
Sight description based on wikipedia
7

This monument was built to celebrate the triumphs of the military Order of the Knights of Santo Stefano over the Ottoman Empire and the Barbary pirates. It stands in front of the little ditch that Grand Duke Ferdinando I de Medici symbolically dug in the late 16th century to expand the port of Livorno. The duke stands atop a pedestal that is carved with chained men of different ethnic groups, who were chosen to represent the four stages of human life. They all bear expressions of psychological pain on their faces.
Image by Sailko on Wikimedia under Creative Commons License.
8

Located on Piazza Grande, the Cathedral of St. Francis, also know as the Duomo, is one of Livorno’s most prominent landmarks. It was designed by the Medici in the 16th century. The facade has a portico with English Renaissance round arches. Inside the cathedral there are numerous beautiful old paintings and canvases, which over the centuries have been constantly relocated in order to save them from natural disasters and wars.
Image by jeffwarder on Wikimedia under Creative Commons License.
9

Via Grande is one of Livorno’s oldest and busiest streets. A variety of fashionable shops, souvenir street-stalls, lovely cafés and restaurants are located along this charming historic street. Take a walk on Via Grande to feel the vibrancy and color of daily local life.
Image by Luca Aless on Wikimedia under Creative Commons License.
10

The Livorno Market (also know as Mercato Delle Vettovaglie) building’s 95-meter-wide facade is characterized by two rows of large, round-arched windows that provide maximum light to the interior, while the entrance is highlighted by four classic columns. The main hall’s interior decorations were designed by Lorenzo Gori. Be sure to check out the beautiful architectural features of this huge water-front complex.

***Alle Vettovaglie was born from a different idea of ​​a place dedicated to food ... being inside the Central Market of Vettovaglie in Livorno, means being in the temple, in the navel of Labronian food and wine, means being in contact with all the artisans of taste, and with demanding customers, who are no longer satisfied with frozen, pre-cooked products, with the desire to buy something fresh, and originally ... true.

The philosophy of Alle Vettovaglie is a different approach to being able to refresh oneself, being able to speak with real hosts, who talk about the products they have on the counter, knowing deeply the origin and the producer, cheesemaker or winemaker. Behind each product, there is a careful selection and knowledge of the product. Our mission is to involve the customer who decides to come to us, that the palate has its own well-defined geography, and we have the task of making them discover that behind the food there is curiosity, simplicity, but also study and application. . It is democratizing the products that until now are designed for a few…. From wine to food, we will surprise you with what we will offer you. ***PH***
Image by LivornoDP on Wikimedia under Creative Commons License.

The seafront walkway in Livorno curves along a path dotted with intriguing architecture. The 19th century promenade, today called viale Italia, follows the sea and runs parrallel to fields and the surrounding landscape. It's one of Livorno’s historical paths that incorporates majestic palazzos as well as bathing spots dating from the XIX century. ***PH***