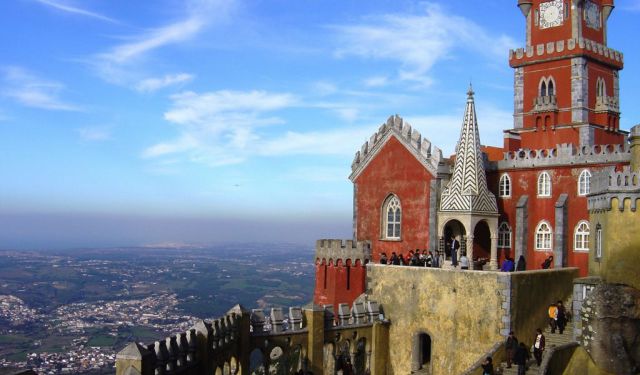 A charming little township on the outskirts of Lisbon, Sintra is a place where there's something for everyone. As if straight out of a fairy tale, this area is a home to several magnificent castles, palaces and gardens, the grandiosity of which fits for a king; and it has been a firm favorite of Portuguese royals since the late 15th century.

The diversity of styles found here is rich – Romanesque, Gothic, Neoclassical, Renaissance and (typical for Portugal) Manueline, with none of the buildings remotely the same; each is incredibly unique. A combination of architectural splendor and magnificent scenery of the hills never fails to impress visitors.

Arnaldo Bermudes, one of Portugal's greatest architects, designed for Sintra the extravagant Manueline-Gothic Câmara Municipal (Town Hall). One look at this extraordinary flamboyant building is enough to tempt anyone to say, "Disneyland, eat your heart out!"

An approximately 15-minute stroll through the historic center of Sintra brings you to Igreja de Santa Maria (the Church of Santa Maria), a lovely Mendicant Gothic temple.

From here it will take you a bit of a hike further up the hill towards the Palácio Nacional da Pena (Pena National Palace); en route to it you can check out another cute basilica – Igreja da Sao Pedro (St. Peter Church). The palace itself features a mix of Neo-Gothic, Neo-Manueline, Neo-Islamic and Neo-Renaissance styles, and is a prime example of 19th-century Romanticism.

Having marveled enough at its beauty, your logical next stop, right near the entrance to Pena Park (in which the palace is located), is the monumental Castelo dos Mouros (Moorish Castle or The Castle of The Moors). This former military fortress, built around the 10th century under the Moorish occupation of the Iberian Peninsula, is perched on top of the steep hillside, and is a staple on the local tourist trail. Its famous walls snake across the hills, providing stunning views over the town, the Palace of Pena and further afield towards the Atlantic Ocean.

To discover the most emblematic monuments of Sintra on foot, to absorb its history and admire the beauty of local architecture and surrounding nature, take this self-guided walking tour.
Image Courtesy of Wikimedia and Husond.
How it works: Download the app "GPSmyCity: Walks in 1K+ Cities" from iTunes App Store or Google Play to your mobile phone or tablet. The app turns your mobile device into a personal tour guide and its built-in GPS navigation functions guide you from one tour stop to next. The app works offline, so no data plan is needed when traveling abroad.

Arnaldo Bermudes was among the most memorable of Portugal's greatest architects. He designed the extravagant Manueline Gothic Sintra Town Hall, built in 1910. After one look at this extraordinary flamboyant building erected over the bones of the old Chapel of Sao Sebastiao one is tempted to say, "Disneyland, eat your heart out."

The enormous clock tower and spire challenge the sky line. Even the National Palace is not more impressive. The spire has glazed reflective tiles picked out in gold, white and green, with emblems from the Portuguese coat-of-arms. Atop the spire is an armillary sphere. At the four corners of the crenelated tower are smaller spires, similarly tiled.

The architecture of the Town Hall is taken generally from many of the drawings of Arnaldo Bermudes. The overall style is neo-Manueline, reflecting Revivalist Historicist elements. The facade is a bit austere with arched neo-Manueline windows and a veranda with arches and a pediment of the city arms.

The inside holds a lush renaissance cloister with narrow upper balconies. Sad to say, the Town Hall is not normally open to tourists, but what a sight to see.

After Afonso Henriques conquered Sintra in the 12th century, liberating the area from Moorish domination, he set about creating church parishes. The first church was the church of Santa Maria. It was a small church on the outskirts of town. In 1254 the town had grown and prior Lourenco Anes established Santa Maria as a collegiate church.

By the 14th century the church had been completely redone in the Gothic style. In the 16th century the high choir was built, the Gothic portals were changed, and the ceiling redone in wood with the coat of arms of the Queen. The altars were fitted with Hispano-Arabic tiles. The collegiate church was dissolved in 1640.

The style of the church today follows the Mendicant Gothic fashion of Medieval churches. It has three naves, the central nave is higher than the side naves. The naves are separated by arcades of broken arches. The two-bay chancel has a polygonal top and cross vault. The main facade has a broken arch with archivolts within a gable.

Over the front portal there is a Baroque window. The side portals of the exterior are Gothic with buttresses and decorated corbels. The main portal on the south side has canopy arches separated by a thin mullion. Renovations of the 1930s sought to preserve the church's initial "purity."
Image Courtesy of Wikimedia and GualdimG.
3

Saint Peter's of Sintra got its start as one of Afonso Henriques' church building projects after the reconquest of Lisbon in 1147. It was rebuilt in the 16th century by Dom Alvaro de Castro. The church is a single vessel building. It has one nave. The interior walls are covered in blue azulejo tiles dating from the 18th century after the earthquake of 1755.

The tiles were made by the Lisbon Workshop. They show scenes in the life of Saint Peter. There is also a 15th century Gothic sculpture of the saint, and a 17th century ivory figure of Christ. Above the baroque doorway is the coat of Arms of the archbishop Dom Tomas de Almeida. The archbishop is credited with funding the interior decorations.

When you enter the nave of the church, pay attention to the walls covered with beautiful 18th century panels with scenes from the life of Saint Peter. There is also a stone statue of St. Peter.
Image Courtesy of Wikimedia and Vitor Oliveira.
4

The Pena National Palace sits on top of a high hill of the Sintra Mountains. On a clear day it can be seen from Lisbon. It is a multi-colored restored royal palace, an important expression of 19th century Romanticism. It was not always so.

In the Middle Ages, tales of an apparition of the Virgin Mary prompted construction of the chapel of Our Lady of Pena. The chapel became a popular destination for pilgrims. In 1493, King John II of Portugal and his spouse, Queen Leonor, came to pay homage. Seeing the magnificence of the site, he ordered a monastery built.

The monastery was given to the Order of Saint Gerome. It harbored a small company of monks. The Great Earthquake of 1755 leveled everything, but the chapel was mostly spared.

In the early 1800s King Ferdinand, impressed by the miracle on the mountain, decided to rebuild the old monastery. He also ordered a castle for the royal family. Baron Wilhelm Ludwig von Eschwege, a German architect, was hired to make Pena Palace.

The Palace is complex. There is the restored monastery with clock tower, a chapel yard, walls of arches, two gateways, a drawbridge and a cylindrical bastion with a "cathedral" interior. The Palace is a melange of medieval, Renaissance, neo-Gothic, neo-Islamic, neo-Renaissance and neo-Manueline styles with a distinct Romantic ambience inside and out.

The king had taken the shrine and turned it into a folly. But what a folly it is! The visitor is taken to exotic fairylands. The clock tower, completed in 1843, is a part of the Queen's Terrace. It has a sundial and a cannon, meant to be fired at noon. Does it disturb meditations in the chapel? The monks did not complain.

The park around the castle contains trees from around the world. Magnolias, Japanese Cryptomeria, Ginko, Sequoia, Cypresses and Cedars fill the Queen's Fern Garden. Hans Christian Anderson, Richard Strauss and Lord Byron have thought the place a castle of the Holy Grail. The Palace is a National Monument and a jewel in the crown of Sintra.
Image Courtesy of Wikimedia and Chabe01.
5

The Moorish Castle was built in the 8th and 9th centuries as a fortification of Muslim Iberia. In 1147, when Lisbon was captured by the army of Afonso Henriques, the castle surrendered to the Christian forces. Afonso established the Chapel of San Pedro within the fortress.

In 1375 King Ferdinand I restored the castle and strengthened the fortifications. By the 16th century the military effectiveness of the castle had waned. The inhabitants had abandoned the fortress for the village of Sintra. In 1755 the Lisbon earthquake nearly destroyed the chapel and made the castle unstable.

By 1838 the towers and walls of the castle were in ruins. Then Ferdinand II came to the rescue. He refurbished and improved the castle as he was restoring the neighboring monastery and building the Pena Palace. He consolidated the walls, reforested open areas and restored the chapel.

The castle consists of a double line of crenelated stone walls weaving their way the granite hills of the promontory. The towers are much changed from their original size and appearance. Nonetheless, the layout of the turrets follow the design engravings of Book of Fortresses from 1509.

Nearby the Castle are many other historical sites, including The Garden of Pena, the Estate of Pena Verde, and the Quinte da Regaleira. The Castle now is a Romantic ruin and a tourist magnet, especially for those hearty souls who don't mind a lot of hiking over granite outcroppings.

The chapel has a rectangular nave. lies outside the secondary wall of the fortress, near the entrance. The south wall has an arched doorway with colonnades with fantasy animal motifs. On the north side is a triumphal arch on double columns. There is a cradle vault with vestigial frescoes and a frieze with geometric designs.

The castle is classified as a National Monument and a UNESCO World Heritage Site.
Image Courtesy of Wikimedia and Diego Delso.

Traces of humanity in Sintra date back to Paleolithic times. At an open air site near the church of Sao Pedro de Canaferrim and the Moorish Castle there were found ceramics from 5,000 BC. The name Sintra is indo-European. It means "bright star" or "sun." Romans called the place "sacred mountain." Ptolemy called it "mountains of the moon."