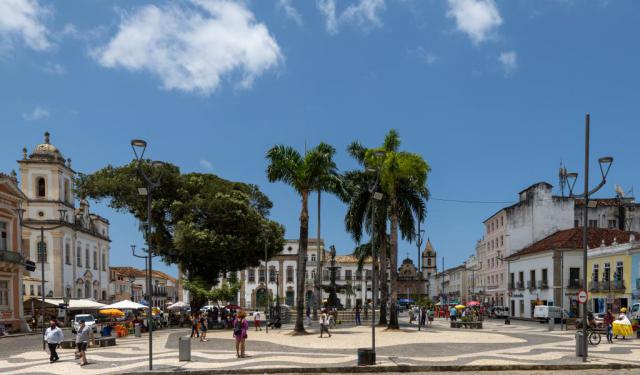 The main city of Brazilian state of Bahia, Salvador is a tasty cocktail of Portuguese, African and Brazilian cultures manifested in the colonial architecture set against a luring, tropical coastline. This walking tour takes you to the historic heart of the city which has retained much of its old-time atmosphere, reflected in the cobblestone alleys, large squares, colorful facades and numerous churches.
Image Courtesy of Wikimedia and lilap.
How it works: Download the app "GPSmyCity: Walks in 1K+ Cities" from iTunes App Store or Google Play to your mobile phone or tablet. The app turns your mobile device into a personal tour guide and its built-in GPS navigation functions guide you from one tour stop to next. The app works offline, so no data plan is needed when traveling abroad.

Palacio Rio Branco, one of the oldest palaces in Brazil, was built in the 16th century. Formerly the site of the Bahia government, it has been used as barracks, a residence for Dom Pedro II when he visited in 1859, and even a prison. Designed in the French Neoclassical style, in 1984 the palace was completely restored as it was in miserable condition. Today it houses the Pedro Calmon Foundation, the Cultural Foundation of Bahia and the Memorial of Governors.
Image Courtesy of Wikimedia and Paul R. Burley.
2

Camara Municipal de Salvador - The Salvador City Hall - was built in 1549, shortly after the foundation of the city, and initially incorporated legislative, judicial and executive powers under one roof, including a public prison which occupied the ground floor and the basement. The prison was divided into northern and southern wings – for women and men, respectively – and remained here until the first half of the 19th century when it was transferred to Fort Barbalho. Eventually, the judiciary also moved out. In the 1970s the building underwent renovation set to recover its original style, reflecting Portuguese mannerism of the 17th century. In 1997 the Salvador City Hall Memorial was established. However, it opened to the public only in 2001. The memorial houses a collection of artifacts pertaining to the history of Salvador, including paintings, photographs and more.
Image Courtesy of Wikimedia and Paul R. Burley.
3

Elevador Lacerda connects the upper and lower portions of Salvador. This famous elevator will carry you from one section to the other in 20 seconds. At 70 meters high, it is one of the highest and largest public lifts in the world, with space for 120 passengers. It is the least expensive way to reach the lower city and see the port. In the past there had been a rope elevator built by Jesuits in 1610, later an iron lift, and in 1928 an electric elevator was built. It offers a magnificent view of the bay. It is open from 5:00 am until midnight each day.
Image Courtesy of Wikimedia and Carlos Alkmin.
4

Igreja da Misericórdia, built in the 17th century, is listed as a Heritage Building of the National Trust. It was the site of one of the most illustrious marriage ceremonies in the city. A major Salvador landmark, you will see colorful glazed tiles, called 'azulejos,' a rich interior and amazing religious paintings.
Image Courtesy of Wikimedia and Paul R. Burley.
5

5) São Francisco Church and Convent of Salvador (must see)

The São Francisco Church and Convent of Salvador is located in the historical centre of Salvador. The convent and its church are very important colonial monuments in Brazil. The current church was built between 1708 and 1723, but the interior was decorated by several artists during a great part of the 18th century. Most decoration of the church and convent were finished by 1755.

The friars of the Franciscan Order arrived in Salvador in 1587 and soon built a convent and church, but these were destroyed during the Dutch invasions of Bahia in the early 17th century. The works on the current convent began in 1686 under Father Vicente das Chagas following a grandiose design that took decades to complete. The current church was built between 1708 and 1723, but the interior was decorated by several artists during a great part of the 18th century. Most decoration of the church and convent were finished by 1755 as well.

The wooden ceiling of the entrance hall was painted with scenes in illusionistic perspective by José Joaquim da Rocha in 1774. The two-storey cloisters, finished around 1752, were decorated with monumental panels of blue-white tile panels. The tiles, with moralistic allegories based on 17th century-Flemish engravings and sayings by Roman poet Horace, were manufactured in Lisbon.

6) Catedral Basilica do Salvador (must see)

The Cathedral Basilica of Salvador, officially dedicated to the Transfiguration of Christ, is the seat of the Archbishop of the city of Salvador. In its origins the present cathedral building was the church of the Jesuit Order of Salvador. The Jesuits arrived in the city still in the 16th century and built a first church and college.

In the second half of the 17th century the Jesuits built a new church - the one that exists today - in the Mannerist style then fashionable in Portugal. The façade is very similar to contemporary Portuguese churches like the Jesuit Church of Coimbra. The façade is made in light Lioz stone brought from Portugal and is flanked by two short bell towers.

Inside, the cathedral is a one-aisled church of rectangular shape, without transept and with a very shallow main chapel. The side walls of the church have a series of lateral chapels decorated with altarpieces. This floorplan scheme is based on the Church of São Roque in LisbonThe chapels of the cathedral offer an interesting showcase of altarpiece art from the late 16th through the mid-18th centuries, all decorated with sculptures and paintings. The sacristy of the church is richly decorated with Baroque furniture, 17th century Portuguese tiles and ceiling wooden panels painted with Mannerist motifs and portraits of important Jesuits.

Image Courtesy of Wikimedia and Paul R. Burley.
Sight description based on Wikipedia.
7

Terreiro de Jesus, one of Salvador’s most prominent landmarks, is surrounded by many old architecturally stunning churches in the city’s historic center. This square contains an impressive fountain adorned with several sculptures.
Image Courtesy of Wikimedia and Paul R. Burley.
8

The Faculty of Medicine, Brazil’s oldest medical school, was founded in 1808 by a bishop. It is housed in a beautiful palace richly decorated with sculptures. Symbolizing the beginning of Brazil's cultural independence, it has suffered damage from two fires and was rebuilt in an eclectic style with Neoclassical lines. The first electric light in Salvador was on the porch of this building. It also contains a museum on its ground floor.
Image Courtesy of Wikimedia and Wellington Da Costa Gomez.
9

Largo do Pelourinho, a square in the historic district of the city, is where you will find artwork, crafts and other gifts created by local artisans, as well as numerous galleries. Be sure to check out this square and visit its many shops and vendors.
Image Courtesy of Wikimedia and Samory Santos.
10

Igreja Nossa Senhora do Rosário dos Pretos, built in the Rococo style in 1704, is an impressive church with a bell atop its spire. Its windows and doors are finely detailed, with rich carvings inside and painted tiles depicting Biblical scenes. It also has a Neoclassical altar and fine 18th century statues of Our Lady of the Rosary and other saints. Behind the church is an old slave cemetery.
Image Courtesy of Wikimedia and Paul R. Burley.
11

Igreja Convento do Carmo, located in Pelourinho, was a Carmelite convent and one of the largest and oldest of the Carmelite Order in Brazil. Construction was begun in 1586. It has served as shelter during war as it has fortified walls. This architectural masterpiece of incomparable beauty now houses Salvador’s first luxury hotel.
Image Courtesy of Wikimedia and Paul R. Burley.
12

Igreja do Boqueirão, an architectural jewel in the historic center of Salvador, was constructed in 1726 in a combination of Baroque, Rococo and Neoclassical styles. Recently fully restored, this beautiful church’s interior houses adornments in gold and amazing religious paintings.
Image Courtesy of Wikimedia and Paul R. Burley.
13

Forte de Santo Antônio Além do Carmo is an old fort that defended the north entrance to the city. The construction of the present structure was begun in 1695 and ended in the early 18th century. Located on a hill, it protected Salvador from the sea and land. Built in the Vauban style, it is rectangular in shape with pentagonal bastions in the corners. It also served as a prison for African-Brazilians. In the 20th century a Neo-Gothic façade was added and today it is registered as a Heritage Monument.
Image Courtesy of Wikimedia and Toluaye.

Create Your Own Walk in Salvador

Creating your own self-guided walk in Salvador is easy and fun. Choose the city attractions that you want to see and a walk route map will be created just for you. You can even set your hotel as the start point of the walk.

Salvador’s historic district contains many old Catholic churches with wonderful architecture and history. It has so many that some joke that one can visit a different church in Salvador each day of the year. Take the following tour to discover the city’s best churches.