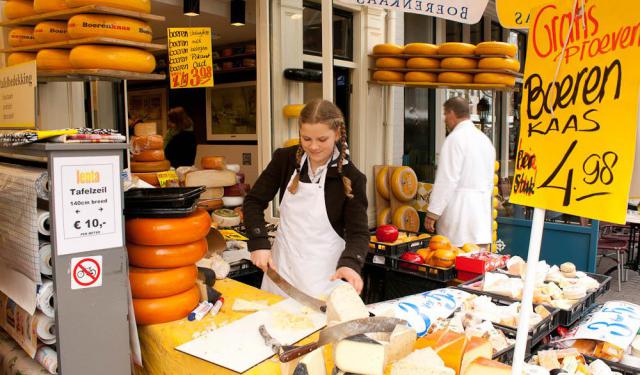 Image by Fred Romero on Flickr under Creative Commons License.

The name Stadsdriehoek refers to the historic City Triangle of Rotterdam, which dates from the late Middle Ages. The area was bounded by Cool Vest and Schiedamsevest to the west, the Golden Vest to the northeast and the Nieuwe Maas to the south. Take our tour to see the top sights in this beautiful area.
How it works: Download the app "GPSmyCity: Walks in 1K+ Cities" from iTunes App Store or Google Play to your mobile phone or tablet. The app turns your mobile device into a personal tour guide and its built-in GPS navigation functions guide you from one tour stop to next. The app works offline, so no data plan is needed when traveling abroad.

The Witte Huis or White House is a skyscraper in Rotterdam, Netherlands, inspired by American office buildings and built in 1898 in the Art Nouveau style. The building is 43 m (141 ft) tall, with 10 floors, and was the tallest in Europe at the time it was built. The building is listed as a Rijksmonument. The architect W Molenbroek designed the 10-storey building, at the time an unprecedented height in Europe. It is constructed from iron, steel, and cement, and includes two thick interior walls to increase strength. Unlike many other contemporary buildings of the time, wood was not a significant construction material due to the fear of fire. It was also one of the few buildings in central Rotterdam to survive the German bombing campaigns of World War II.

Why You Should Visit:
Way more impressive in reality than in the photos, and worth the stop to have a drink while appreciating the little channel & old boat-houses around.
Great for photographs – especially taken from across the Old Harbour, for a reflection in the water.

Tip:
You can also sit and enjoy the view of Witte Huis at one of the several nice cafés out front in the Old Harbour.


Image by F.Eveleens on Wikimedia under Creative Commons License.
Sight description based on wikipedia
2

Cube houses (Dutch: Kubuswoningen) are a set of innovative houses built in Rotterdam and Helmond in the Netherlands, designed by architect Piet Blom and based on the concept of "living as an urban roof": high density housing with sufficient space on the ground level, since its main purpose is to optimize the space inside. Blom tilted the cube of a conventional house 45 degrees and rested it upon a hexagon-shaped pylon. His design represents a village within a city, where each house represents a tree, and all the houses together, a forest.

The houses in Rotterdam are located on Overblaak Street and beside the Blaak Subway Station. There are 38 small cubes and two so-called 'super-cubes', all attached to each other. The total area of the apartment is around 100 square meters, but around a quarter of the space is unusable because of the walls that are under the angled ceilings.

Tip:
Definitely visit the show house (open for visitors 7 days a week for a small fee) to discover how the interiors work or stay at the StayOkay hotel that is part of the complex.
If you're just passing through, make sure to take the off-kilter photographs that will surely perplex your friends at home.
Be cautious if it's snowing, as the whole area gets slippery if no one shovels.
Image by Staka on Wikimedia under Creative Commons License.
Sight description based on wikipedia
3

The Binnenrotte is a street in the heart of Rotterdam that was originally part of the river Rotte. It became a dry open space after the construction of the railway viaduct for the Rotterdam-Dordrecht train line in 1871. On Tuesdays and Saturdays, Binnenrotte Square is used by the Rotterdam Market Center, a general goods market boasting over 450 stalls.
Image by Hanhil on Wikimedia under Creative Commons License.
4

This basilica was built between 1449-1525 and was the first all-stone building in Rotterdam. Many important events took place here. The last priest of the Laurenkerk was Hubertus Duifhuis. The Reformation took place in 1572 and the Laurenskerk became a Protestant church. Ministers of the church include Laurens Johannes Jacobus van Oosterzee, Abraham Hellenbroek, Jan Scharp and J.R. Callenbach, who wrote a book about the history of the church a few years before the Rotterdam Blitz. The church is still used for worship of the Protestant Church.

In the Rotterdam Blitz on May 14, 1940, the Laurenskerk was heavily damaged. At first, there were calls to demolish the church, but that was stopped by the Germans. The provisional National Monuments Commission had both supporters and opponents of restoration. In particular, committee member and architect J.J.P. Oud opposed rebuilding in 1950 and presented an alternative plan which would preserve only the tower. Next to the memorial, a new, smaller church would be built. This alternative plan was rejected, particularly because restoration of the Laurenskerk was viewed as a symbol of the resilience of Rotterdam's community. In 1952, Queen Juliana of the Netherlands laid the foundation stone for the restoration, which was completed in 1968.

Why You Should Visit:
Remarkable, because it is the only remaining medieval building in Rotterdam.
Besides the typical services, there are also concerts, symposiums, workshops, expositions, and other events.
The church offers a unique insight into the Rotterdam's history, architecture, art, and cultural diversity via an audio tour.

A major historical landmark, Cityhal Rotterdam is one of the few city center buildings which was not bombed in World War II. It is one of the many attractions in the Coolsingel area of the city. Construction of the famous building took six years, and was completed in August 1920. Its central hall is designed to represent Rotterdam as a port and trade city.
Image by T Houdijk on Wikimedia under Creative Commons License.
6

The World Trade Center is a beautiful combination of past and present. Architect J.F. Staal began construction of the building in 1936, and its initial design was completed in 1940. In 1984 work began to add a high rise tower on the top of the existing structure. Today the green tower reaches 93 meters tall, and is a familiar sight to visitors to the city.
Image by Mb90 on Wikimedia under Creative Commons License.
7

The Schielandshuis dates back to 1665 and is the only historical edifice in the city centre that survived the ravages of war. The building was under restoration for a long time before it finally reopened as a museum in 1986. It once served as a residence and a place for receptions and meetings. Now, after the museum's relocation, new tenants came in: Rotterdam Partners, Rotterdam Tourist Information, the Rotterdam Council for Art and Culture, and NAi Publishers.
Image by M.M.Minderhoud on Wikimedia under Creative Commons License.
8

What to buy here: Dutch Cheese.

Everyone could agree that it’s hard to describe Holland without immediately picturing green meadows, windmills, grazing cattle and its biggest export: cheese. Along with bread and butter; cheese is always present at breakfast and lunchtime in almost every Dutch home for obvious reasons. Cheese making has been part of the national heritage for centuries and has evolved to become a highly prized product around the world. Dutch cheese is simply delicious and with plenty of variations, textures and flavors to choose from, the only difficult task you could expect is deciding which one to buy. Just like in any other town, Rotterdam has his own specialized shop called De Kaashoeve (“The cheese farm”) which is stocked daily with authentic cheeses from the region. Pick your favorite young or old cheese in any of the popular variations: Boerenkaas, Edam, Maasdammer or the famous Gouda, which is also available in a baby wheel version from half a pound to a pound making it very convenient and portable for those who prefer to travel light. Price: Starting 6.50€.

The Roman Catholic Eendrachtskerk is one of the oldest churches in Rotterdam, dating back to 1868. It was designed in a neo-romanesque style by Belgian architect F. Laureys, with round arches, hemispherical curves on the windows, and belt courses. Officially it is named H.H. Laurentius en Ignatius.
Image by Wikifrits on Wikimedia under Creative Commons License.
10

The Wallonian church dates back to the 1920s. Located in the city center, it is surrounded by many other places of worship. The church has a traditional style and yet features some quite innovative aspects for a church - expect to find some quite peculiar things inside.
Image by jabbusch on Flickr under Creative Commons License.
11

The Scots International Church is located in Rotterdam. An English-language Protestant church in the Presbyterian tradition, it is part of the Church of Scotland, within the Church's Presbytery of Europe. The church was first built in 1643 for the many Scottish merchants, sailors and soldiers who lived in Rotterdam, and was built on behalf of the city. The first Scottish minister was Alexander Petrie, who traveled from Perth in Scotland to take up his position. In 1722 the church was extended with a special almshouse for widows and orphans of fallen Scots soldiers. The 17th-century church was destroyed in the 1940 bombing of Rotterdam. The current building in the Schiedamsevest dates from 1952 and was designed by MCA Meischke.
Image by Dietmut Teijgeman-Hansen on Flickr under Creative Commons License.

Holland's major port, Rotterdam is an attraction in its own right, totally rebuilt after WWII, hence featuring bold, modern architecture, sometimes as peculiar as the world-famous Cubic Houses. The local Maritime Museum, displaying vintage ships and exhibits, attests to the city's great seafaring past. To get to know Rotterdam in its variety, follow this orientation walk and explore the...  view more