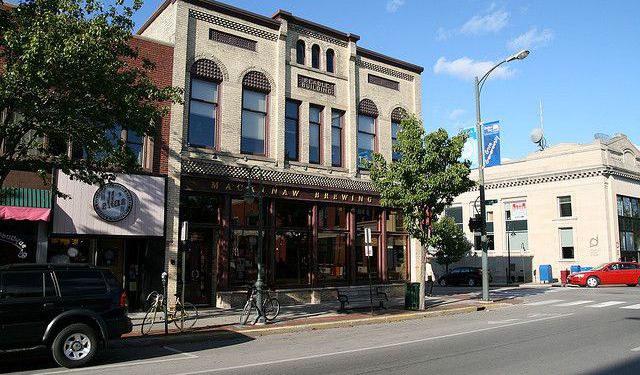 Named after the Grand Traverse Bay on the shores of Lake Michigan, at the head of which it stands, Traverse City is an interesting place with lots of parks, theaters, galleries and other attractions. Visitors are drawn here by the richness of recreational and cultural activities. The City Opera House, noted for its distinctive Victorian style, is perpetually busy with different plays and concerts. This orientation walk will help you discover some of the most visited and renowned sights of Traverse City.
Image Courtesy of Flickr and Bernt Rostad.
How it works: Download the app "GPSmyCity: Walks in 1K+ Cities" from iTunes App Store or Google Play to your mobile phone or tablet. The app turns your mobile device into a personal tour guide and its built-in GPS navigation functions guide you from one tour stop to next. The app works offline, so no data plan is needed when traveling abroad.

City Opera House represents an important building according to its history and its beauty. It was the first building in the city with electric lights. It was a beautiful house for important events such as balls, concerts, plays and other important meetings. It dates back from 1891 and it was functioning till 1920. After a period of time it was restored and now it is used for other events such as dances, meetings and opera performances. It can be used for special occasions such as weddings. It has beautiful wood floors, a large balcony and a very attractive main ballroom with high ceilings. During the last restoration, air-conditioners were included, which may now be used for different occasions. It has a Victorian building style that was made by three brothers-in-law. It has around 1200 seats.
Image Courtesy of Wikimedia and Andrew Jameson.
2

The State Theatre was recently acquired by the Traverse City Film Festival from a gift by Grand Traverse Rotary. The theatre underwent restoration and was re-opened on November 17, 2007.

The State Theatre is located on on East Front Street in downtown Traverse City and was originally built in 1918 and rebuilt in 1923 after a fire. It showed the first talking movie seen in Northern Michigan in 1929 when it was known as the Lyric Theatre. It closed down in 1991,when the cinemas at the Grand Traverse Mall opened, and their then owners GKC wanted business at those theaters. It was revitalized before being used during the Traverse City Film Festival which began in July 2005. On November 17, 2007, the community celebrated the grand opening of the theater as a year round art house.

Image Courtesy of James Zhu.
Sight description based on Wikipedia.
3

Front Street is the very best place to be in this popular northern Michigan resort community. The street captures just about everything residents and visitors like about Traverse City: scenic views of the Boardman River, a Victorian-era opera house, the Jay Smith Walkway pocket park, generous 12-to-14-foot-wide sidewalks with benches and shade trees, the city's highest density of stores and businesses, and numerous festivals and special events that attract hundreds of thousands of people each year.
Image Courtesy of James Zhu.
4

The Bijou by the Bay is a 150-seat nonprofit theater in a lovely City park on Grand Traverse Bay, next to the multi-use TART Trail. The Bijou draws people downtown in droves to see the latest and greatest movies, including blockbuster Hollywood films that we cannot screen at the State due to its deed restriction.
Image Courtesy of Wikimedia and Kendallkotcher.
5

Clinich Park is an attractive recreation venue. It is perfect for a walk, for running, admiring the beauty of the nearby beach and breathing fresh air. The beach and the park are the most populated in the zone and represent an interesting touristic point in the city. The nearby Grand Traverse Bay is another attraction of this park that makes people just sit and stare at it. It is located in the center of the city, which makes it more populated and better known. On weekends there are organized concerts and celebrations for all the people that spend time there. Families organize small picnics and spend time in the heart of nature.
Image Courtesy of James Zhu.
6