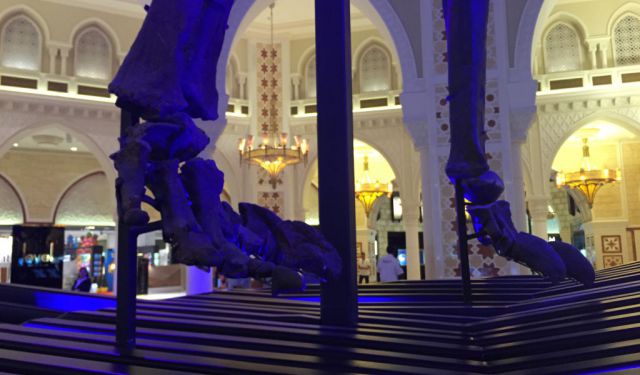 10 Things to Do at Dubai Mall (Other than Shop), Dubai, United Arab Emirates (B)

The shopping malls in Asia never fail to impress me. I’ve written before about those in Singapore but, like most things, Dubai takes it up a notch and there’s everything from skiing to theme parks and dinosaurs!

Being known for its extravagance, it may not surprise you to hear that Dubai doesn’t just have the world’s tallest building, it also has the world’s largest shopping mall (by gross area). In fact, its around the same size as 50 football fields! It’s appropriately named Dubai Mall and you could easily go there and do absolutely no shopping at all. It is particularly good for children!

I couldn’t get over how impressive this huge waterfall is. Cascading through the four levels of Dubai mall, it has fibreglass human divers leaping out. It actually reminded me of a similar structure from Take That’s Progress tour – anyone there remember that? Outside the mall there is also the Dubai Fountain which puts on quite a performance.

I have written before about Dubai being a bit fake, so when I saw a rather understated sign saying there was a dinosaur in the mall, I obviously assumed it wasn’t real . But, knowing how much my daughter likes the prehistoric creatures, we went in search of it. You can imagine my shock when we found it and discovered it was the REAL bones of a Diplodocus! I had to check with the ladies working there to make sure. A shopping mall seemed a strange place to have such a historic structure. Discovered in Wyoming in the USA in 2008, the only part which is not real are the tiny bones at the end of its tail. Very impressive!  ...... (follow the instructions below for accessing the rest of this article).
This article is featured in the app "GPSmyCity: Walks in 1K+ Cities" on iTunes App Store and Google Play. You can download the app to your mobile device to read the article offline and create a self-guided walking tour to visit the attractions featured in this article. The app turns your mobile device into a personal tour guide and it works offline, so no data plan is needed when traveling abroad.