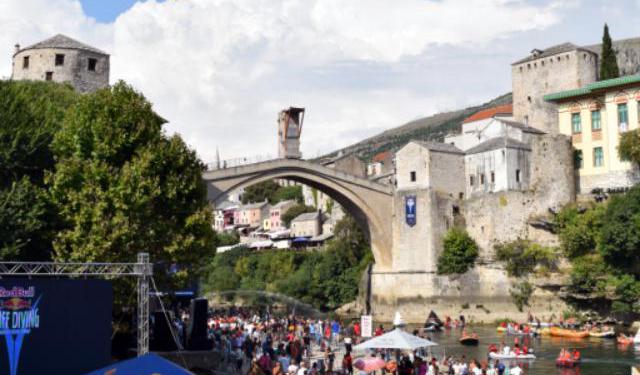 10 Things to Do In and Around Mostar, Mostar, Bosnia-Herzegovina (B)

Very slowly, Bosnia and Herzegovina is getting more discovered by tourists. It’s a beautiful country with spectacular nature and historical cities, which makes it absolutely worth a visit!

One of those historical cities is Mostar: small streets, atmospheric restaurants, the famous Stari Most bridge, but also beautiful street art. You can find it all in Mostar! I really loved the city, but also in the surroundings (+/- 1-2 hours by car) you can find some magnificent places. If you have more than just one day in Mostar, there is plenty to visit as a day trip. In this article I’ll tell you all about the must do’s and visits when travelling to Mostar.

The Stari Most actually is the face of Mostar: it’s the bridge which crosses the Neretva River. Mostar received its name thanks to the bridge keepers which were called Mostari. Unfortunately, the Stari Most, part of the UNESCO Word Heritage list, was completely destroyed in 1993, during the Bosnian War. During the reconstruction, most of the original stones were removed from the river and used again. In 2004, the reopening was happening. ...... (follow the instructions below for accessing the rest of this article).
This article is featured in the app "GPSmyCity: Walks in 1K+ Cities" on iTunes App Store and Google Play. You can download the app to your mobile device to read the article offline and create a self-guided walking tour to visit the attractions featured in this article. The app turns your mobile device into a personal tour guide and it works offline, so no data plan is needed when traveling abroad.

Create Your Own Self-Guided Walks in Mostar
Guide Name: 10 Things to Do In and Around Mostar
Guide Location: Bosnia-Herzegovina » Mostar
Guide Type: Self-guided Walking Tour (Article (B))
Author: Tamara And Daphne From Girlswanderlust
Read it on Author's Website: https://girlswanderlust.com/bosnia-and-herzegovina/10-things-to-do-in-and-around-mostar-bosnia-herzegovina/
Sight(s) Featured in This Guide: