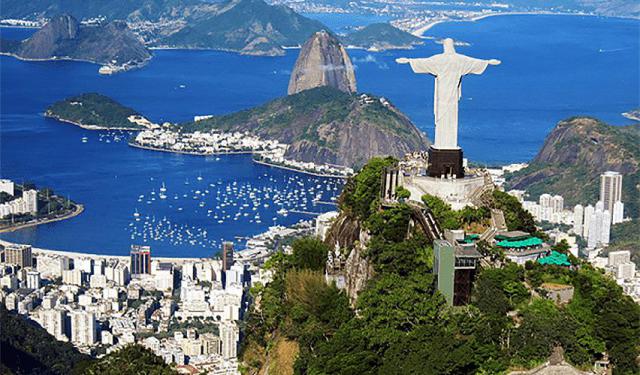 Rio De Janeiro is the second largest city in Brazil, where you spend your days in beaches and night clubbing. Rio De Janeiro combines the natural attractions with a sprawling metropolitan.

The two famous beaches Copacabana and Ipanema, are the prominent beaches of the city and are located close to each other, both beaches have their own distinct charm. Copacabana has more of day activities, while Ipanema is known for its classy nightlife and restaurants.

The renowned 125ft high statue of the Christ the Redeemer stands with open arms, gazing serenely over the city, which is also noted as one of the Seven Wonders of the World, is perched on the top of Corcovado. The statue can be can be seen from any point of the city. The climb to the summit would certainly be rewarding with a view of the entire city.

Famous for its cable car way, Sugar Loaf Mountain offers a panoramic view of the entire city. Although strongly recommended to visit at the dusk or dawn to see the sun unfolding above the city. To get to the summit, you would have to ride two cable cars, the first one stops at Morro da urca from where the second one would get you to the summit. It takes 3-4 minutes to reach from the starting point. The ride itself would be an enchanting experience as the bubble shaped cable cars would offer you the 360 degrees view of the city. ...... (follow the instructions below for accessing the rest of this article).
This article is featured in the app "GPSmyCity: Walks in 1K+ Cities" on iTunes App Store and Google Play. You can download the app to your mobile device to read the article offline and create a self-guided walking tour to visit the attractions featured in this article. The app turns your mobile device into a personal tour guide and it works offline, so no data plan is needed when traveling abroad.