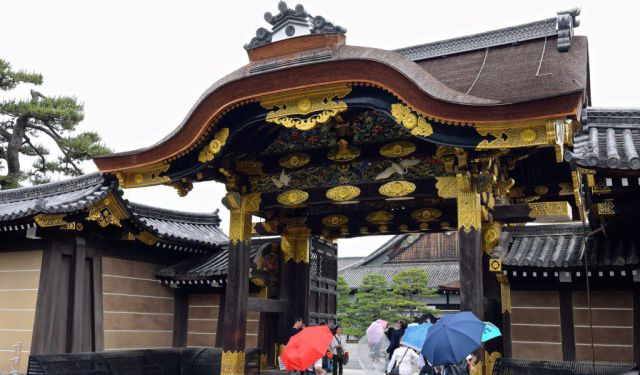 Built on a flatland, Nijo Castle is a UNESCO World Heritage status castle with well-preserved imperial palaces from the feudal era.

Visitor entry into the castle is via the eastern gate where there are a carpark and a ticketing booth.

After purchasing the tickets, I was directed into the castle grounds thru the eastern gate. A few steps past the gate and I would be greeted by the sight of the well-crafted Karamon Gate, which is the entrance to the outer perimeter of the castle.

Immediately behind the Karamon Gate is the Ninomaru Palace; the residence and office of the shogun. The shogun would perform his administrative duties and hold courts here. Visitors are allowed to enter the palace and take self-guided tours of the premises. (Note: Shoes and photography are not allowed in the palace) ...... (follow the instructions below for accessing the rest of this article).
This article is featured in the app "GPSmyCity: Walks in 1K+ Cities" on iTunes App Store and Google Play. You can download the app to your mobile device to read the article offline and create a self-guided walking tour to visit the attractions featured in this article. The app turns your mobile device into a personal tour guide and it works offline, so no data plan is needed when traveling abroad.