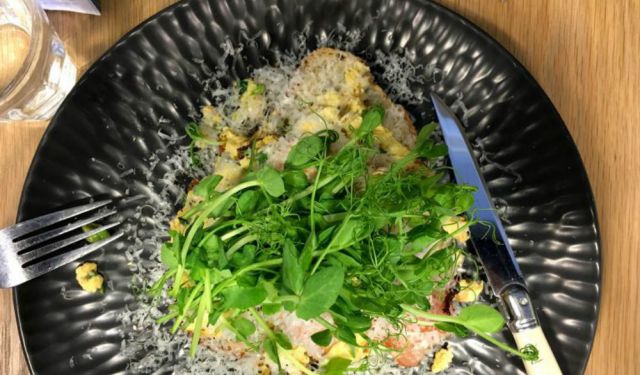 2-Day Visit to Melbourne Is Not Long Enough for a Foodie, Melbourne, Australia (B)

After a week of travel in a rental car, G&N were happy to park in Melbourne for a few days. Equipped with a friend’s suggestions of places to eat and drink (by district) G&N were ready to explore and eat.

The list would take a month to tackle, and they had three days! Without a concrete plan they decided to start with cocktails at the Black Pearl in Fitzroy, a bar with countless awards (#37 of 50 in the world in 2014). The room was empty when they arrived, not a good sign, but as it turns out they were 4-hours early. The party gets started after 11 pm, and well after Nutmeg’s bedtime. Over drinks, they chatted with the bartenders who happily added few more names to the Melbourne food lovers list, including Rice Paper Scissors an Asian fusion restaurant directly across Brunswick Street. G&N were lucky to squeeze into the last two bar seats at Rice Paper Scissors where Ginger started the meal with an espresso martini (pour quoi pas?). The food was perfectly spiced, included creative combinations and was ideal for sharing. ...... (follow the instructions below for accessing the rest of this article).
This article is featured in the app "GPSmyCity: Walks in 1K+ Cities" on iTunes App Store and Google Play. You can download the app to your mobile device to read the article offline and create a self-guided walking tour to visit the attractions featured in this article. The app turns your mobile device into a personal tour guide and it works offline, so no data plan is needed when traveling abroad.