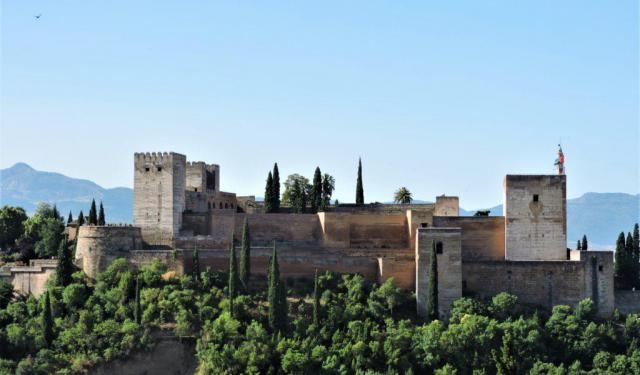 Granada was my introduction to Spain, and I sure picked a city that set the bar pretty high. It’s located in the south of Spain, in the Andalusia region, right next to Sierra Nevada mountains. One thing you notice right away, is the heavy influence of Granada’s Moorish past on the city. Granada was under Muslim ruling for some 700 years, and the Arabic influence can be seen everywhere. From the stunning Alhambra, the Moorish architecture in Albaicin to the ever present Moroccan stores, tea shops and Arab baths. I spent 2 days in Granada Spain

One of the things I really loved about Granada, was that it’s not overwhelming. It’s much smaller and not very crowded compared to other big Spanish cities like Barcelona (here) or Madrid. Granada is very compact and you can pretty much see everything by walking around. As long as you don’t mind the hills, that is. Neigborhoods like Sacromonte and UNESCO recognized Albaicin are pretty hilly and there are lots of stairs involved. ...... (follow the instructions below for accessing the rest of this article).
This article is featured in the app "GPSmyCity: Walks in 1K+ Cities" on iTunes App Store and Google Play. You can download the app to your mobile device to read the article offline and create a self-guided walking tour to visit the attractions featured in this article. The app turns your mobile device into a personal tour guide and it works offline, so no data plan is needed when traveling abroad.