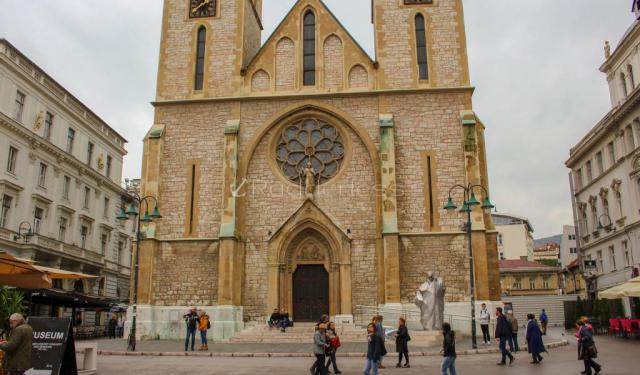 2 Days in Sarajevo, Sarajevo, Bosnia-Herzegovina (B)

I’m not sure if its the bullet holes I saw in the buildings on the way from the airport to the city center but I feel unsettled.

Suddenly, those bullet holes come to life, new ones being made, smoke emanating from them and mothers running with their children trying to seek shelter.

Those were the stories a colleague of mine would share when you ask her why she’d get so anxious at times. Stories of trying to get out of a building that is being fired upon with her kids in tow.

I thought while driving by – Was one of these buildings the one she was trying to escape from with her kids?

Stories of not knowing where her husband is or if he’s alive. Stories that have now been immediately put into perspective for me. Some argue that Sarajevo got dealt one the worst hands in the whole Yugoslavian war ordeal but that…was some 20 odd years ago and I got 2 days in Sarajevo to find its beauty.

- In 1885, Sarajevo was the first city in Europe and the second city in the world to have a full-time electric tram network running through the city, following San Francisco. I’m not sure why I found that fascinating. Maybe it’s connected to my love of trains out maybe I feel like the infrastructure back home in Toronto is like it’s from 1885. ...... (follow the instructions below for accessing the rest of this article).
This article is featured in the app "GPSmyCity: Walks in 1K+ Cities" on iTunes App Store and Google Play. You can download the app to your mobile device to read the article offline and create a self-guided walking tour to visit the attractions featured in this article. The app turns your mobile device into a personal tour guide and it works offline, so no data plan is needed when traveling abroad.