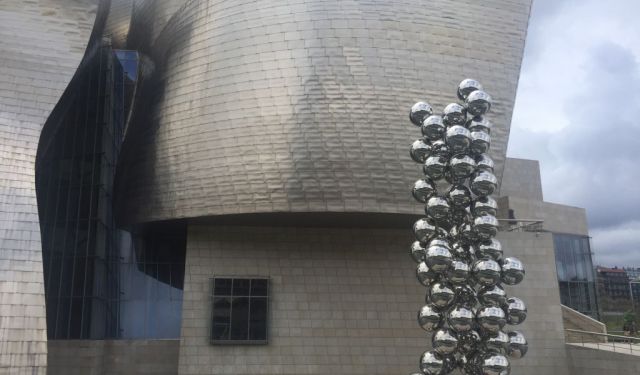 I’ve been wanting to go to Bilbao for years. And the main reason for wanting to go was to see architect Frank Gehry’s masterpiece – the Guggenheim Museum Bilbao, which opened in 1997. I knew people who’d been and said how wonderful the building was but once I finally got there, I realised nothing had really prepared me for its magnificence and sheer wonder.

When Annie and I were discussing going away for a weekend together in January, we opted for Bilbao and San Sebastián as places neither of us had been to, so a new adventure for both of us. We booked everything through British Airways: flights from London Heathrow to Bilbao at the very reasonable price of £112 return and hotels in both Bilbao and San Sebastián. I’m a big fan of flying British Airways whenever I can (and no, they don’t pay me for saying this or upgrade me to business class!) because of their generous hand luggage allowance, which is great for city breaks when you don’t want to waste time checking bags in, and because there are usually a good choice of times for flights throughout the day. And there’s always a complimentary snack and drink. I’ve also found good deals booking hotels through them. For Bilbao we chose a 4* NH hotel, Hesperia Bilbao, which was wonderfully situated virtually opposite the Guggenheim, just across the Nervión river, and cost £84 a night for the room. There’s an element of ‘chain’ to NH hotels but I like them and have stayed at others in Amsterdam and Cartagena in southern Spain: they’re reliable, good value, comfortable and attractive and we found everyone really friendly and helpful. ...... (follow the instructions below for accessing the rest of this article).
This article is featured in the app "GPSmyCity: Walks in 1K+ Cities" on iTunes App Store and Google Play. You can download the app to your mobile device to read the article offline and create a self-guided walking tour to visit the attractions featured in this article. The app turns your mobile device into a personal tour guide and it works offline, so no data plan is needed when traveling abroad.