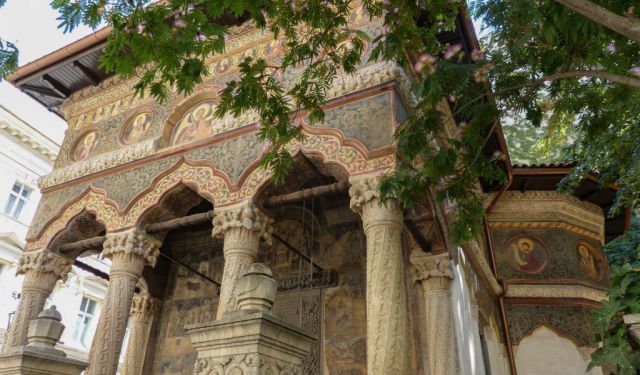 “Stroll through more than 500 years of history from the times of Vlad the Impaler aka Dracula to the “golden era” of communism and the ’89 Revolution and unravel the stories of old and new Bucharest”. – Walkabout Tours, Bucharest

I must confess. I’ve had a hard time grasping how I would write about Bucharest. This fascinating yet often conflicting city has left me utterly dumbfounded on how to best present it. With its tiny treasure trove of charming streets, churches and parks tucked away from huge swaths of historic neighborhoods that were depressingly torn down under Communist rule, I found Bucharest intriguing in its own right as long as I forgot what was once there. An eclectic mix of historic charm, Parisian flair juxtaposed with block after block of notoriously ugly, characterless and stark 80s-style Communist concrete apartments contributed to Bucharest’s confusing feel.

Although Bucharest pales in comparison to the beauty and magic of Prague and some of her eastern neighbors, this city of two million inhabitants has its own unique charm and character particularly if you do not spend a lot of time in the city’s unattractive and somewhat grimy remnants of Communism’s past. However, if you skip this part of town and try to view Bucharest with rose-colored glasses, you will miss a big part of what makes this city so incredibly interesting and will also not understand a big part of Communist Bucharest’s past. A full day or two in Bucharest is enough to give you a sense of the city before heading off to Romania’s beautiful, magical countryside of spectacular villages, castles and of course the mountains. ...... (follow the instructions below for accessing the rest of this article).
This article is featured in the app "GPSmyCity: Walks in 1K+ Cities" on iTunes App Store and Google Play. You can download the app to your mobile device to read the article offline and create a self-guided walking tour to visit the attractions featured in this article. The app turns your mobile device into a personal tour guide and it works offline, so no data plan is needed when traveling abroad.