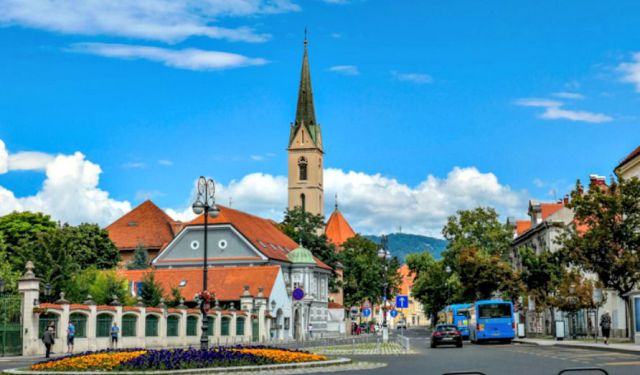 After a nightmare powder test on my Tailwind supplement which tested positive for an explosive, I finally boarded the plane and eventually made it to Zagreb, Croatia via Munich and an Über ride for 110 Kunas (much cheaper than a taxi) uneventfully.

Zagreb is the capital city of Croatia and is home to one out of every six Croatians with a population of 790,000. Zagreb is the result of a merger in 1850 of two medieval towns, Gradec and Kaptol as Croatia struggled under control of several foreign powers including Budapest, Vienna, Berlin and Belgrade.

The two towns were separated by a river which is now diverted and has been covered in pavement. Originally Kaptol was a bishopric and took on strong religious importance while Gradec was home to the Ban (Croatia’s governor) and the Sabor (parliament). Now Zagreb encompasses these two towns in what is called the Upper Town and what used to be fields and farms in Lower Town.

Without walking into any of the sights, a walk around the compact city takes about 1.5 hours to see the general highlights. I did this while I waited on Page to arrive at the Sheraton. ...... (follow the instructions below for accessing the rest of this article).
This article is featured in the app "GPSmyCity: Walks in 1K+ Cities" on iTunes App Store and Google Play. You can download the app to your mobile device to read the article offline and create a self-guided walking tour to visit the attractions featured in this article. The app turns your mobile device into a personal tour guide and it works offline, so no data plan is needed when traveling abroad.