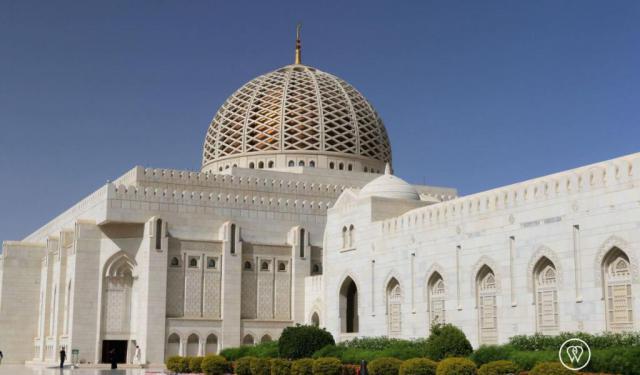 Dating back to the 1st century, Muscat gained prominence in the 14th century when traders used it as a maritime hub on their way to or from India, the far East, Zanzibar and Europe. Indeed, the capital of Oman is located in a natural harbour ideally suited for the safe mooring of vessels that has made the Sultanate a nation of seafarers. Today, Muscat is a vibrant city open on the world that is worth spending a few days exploring.

The sultan Qaboos Grand Mosque is a splendid example of Islamic architecture combining traditional workmanship with modern building techniques. Open to non-Muslims in the morning (8-11), dress appropriately and wander through its gardens before entering the main prayer hall. What used to be the mosque of the superlatives with the largest chandelier, the largest handmade Iranian carpet and simply the largest mosque in the world has been only recently downgraded to second positon behind the Sheikh Zayed Grand Mosque in Abu Dhabi. Nevertheless despite the grandeur and refinement of the mosque, the Omani humility is omnipresent giving it a charm that is merely second to none. ...... (follow the instructions below for accessing the rest of this article).
This article is featured in the app "GPSmyCity: Walks in 1K+ Cities" on iTunes App Store and Google Play. You can download the app to your mobile device to read the article offline and create a self-guided walking tour to visit the attractions featured in this article. The app turns your mobile device into a personal tour guide and it works offline, so no data plan is needed when traveling abroad.