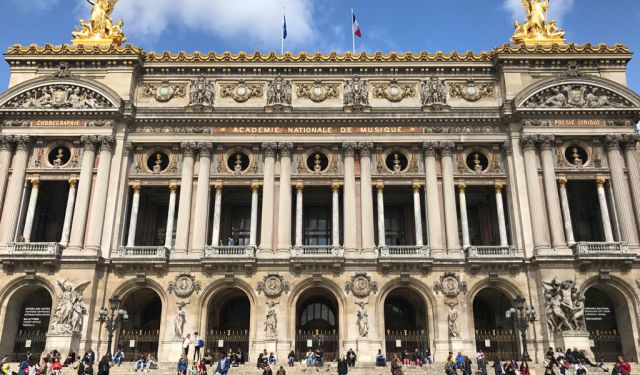 5 Interesting Facts About the Paris Opera, Paris, France (B)

Considering the average lifespan of a theatre in the 19th century was 13 years because of the likelihood of a fire, it’s amazing that the Palais Garnier is still standing 150 years later. Named after its architect Charles Garnier, Paris’ jewel box of an opera house sits proudly atop Avenue de l’Opera in the 9th arrondissement, anchoring the bustling boulevard like a temple to the arts. While its scrumptious exterior is enough to make anyone passing by stop in their tracks, its interior rivals even that of Versailles. This was very much intentional as the opera was the place to see and be seen (and I’m not talking about the actual show). Men and women, young and old alike had a role to play as actors of the public space, and the Palais Garnier was designed as such.

While a visit will give you a small glimpse inside this world, I learned that there’s a certain richness that only a guided tour can provide – including access to the nearly 2,000-seat auditorium that’s draped in red (because it was believed women looked more beautiful on red) and gilded in gold (naturally), set under a glittering chandelier and Chagall’s (controversial) painted ceiling. Rather than divulging all of the Palais Garnier’s secrets, here are 5 of my favorite facts about its fascinating history. ...... (follow the instructions below for accessing the rest of this article).
This article is featured in the app "GPSmyCity: Walks in 1K+ Cities" on iTunes App Store and Google Play. You can download this article for FREE and read it offline on your mobile device.