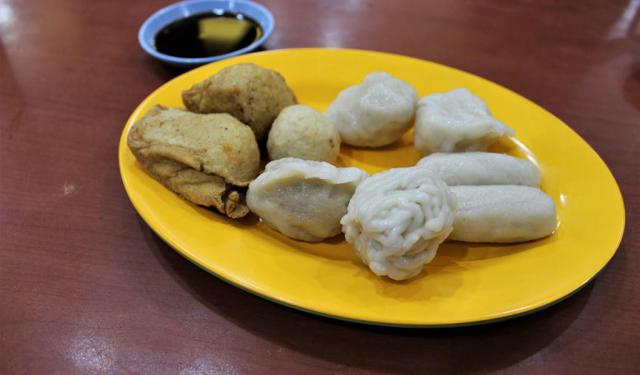 5 Palate Pleasing Foods to Try in Palembang, Palembang, Indonesia (B)

On a recent trip to Palembang, one of the 10 things we did was to explore its cuisine. Palembang owes its food from the Musi River where fish holds more prominence over meat while its former status as a maritime kingdom attracted many migrants to live here and eventually brought a part of their culture from their homelands.

Martabak is a common delicacy found throughout the Malay archipelago brought by Indian traders. These savory stuffed flatbreads differ regionally and Martabak HAR is no exception to the rule. Founded by Haji Abdul Rozak (hence the abbreviation HAR), this martabak eschews all the meats for eggs.

Two ducks eggs are wrapped in dough and fried over a flat-top grill. The resulting martabak is then drenched in a potato dhal before topped with pickled green chili. Having been accustomed to Malaysian and Singaporean-style martabak, I found Martabak HAR’s a bit unusual as the rich taste of duck egg can be quite overpowering.

Nevertheless, the spiceful potato curry and spicy chili provided a good counterbalance to the egginess of the martabak. Martabak HAR can be found almost anywhere in Palembang but to get the original version, check out the branch at Jalan Jenderal Sudirman behind Masjid Agung. ...... (follow the instructions below for accessing the rest of this article).
This article is featured in the app "GPSmyCity: Walks in 1K+ Cities" on iTunes App Store and Google Play. You can download the app to your mobile device to read the article offline and create a self-guided walking tour to visit the attractions featured in this article. The app turns your mobile device into a personal tour guide and it works offline, so no data plan is needed when traveling abroad.