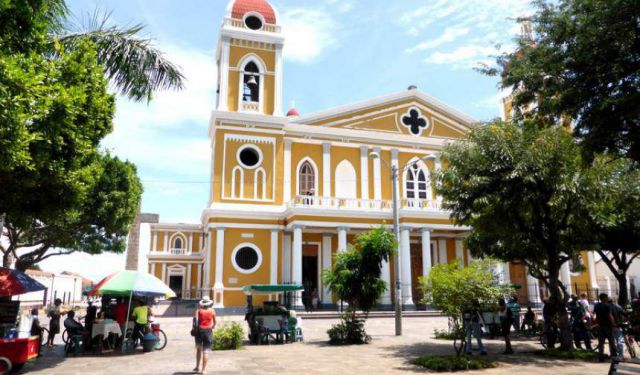 5 Things to Do in Granada Nicaragua, Granada, Nicaragua (B)

Granada is Nicaragua’s most beautiful city with its parks, churches, lakeside location and its food street – Calle La Calzada.

A typical Spanish colonial designed central park that is the hub of Granada. Here you will find local food stalls selling Granada’s famous dish Vigoron – fried pork skins with cabbage salad and yukka wrapped in a banana leaf. Horse drawn carriages can be hired for a tour around the city sights from here. There are approximately 30 twin horse carriages to choose from, seating up to 4 passengers for a 30 or 60 minute journey.

La Iglesia de la Merced the oldest religious church in Central America is located on Calle Real Xalteva. Destroyed in 1655, 1781 and 1854 and rebuilt and completed in 1863 is said to be Granada’s most beautiful church. Spend USD1.00 and climb to the top of the Bell Tower to view Granada from the top.

The yellow and white Granada Cathedral stands majestically on the eastern side of Parque Colon – it is the iconic photographic image of Granada. Built originally in 1583 it has been destroyed over the years and recently rebuilt in 1915. ...... (follow the instructions below for accessing the rest of this article).
This article is featured in the app "GPSmyCity: Walks in 1K+ Cities" on iTunes App Store and Google Play. You can download the app to your mobile device to read the article offline and create a self-guided walking tour to visit the attractions featured in this article. The app turns your mobile device into a personal tour guide and it works offline, so no data plan is needed when traveling abroad.