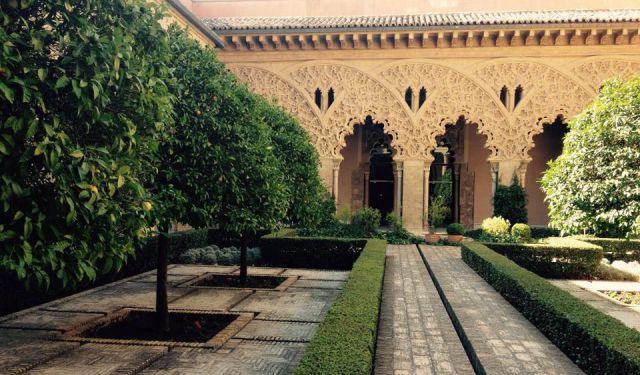 5 Things You Should Do and See in Zaragoza!, Zaragoza, Spain (B)

I’ve just returned from a weekend trip to Zaragoza, Spain. The city was even more beautiful than I imagined and much hotter than I’d hoped (if you plan to go to Zaragoza try avoid the middle of summer…it’s worse than Seville’s heat!). We had one full day in the city so we made sure to get the most out of our time there, continue reading for what I think are the 5 things you’ve got to do in Zaragoza!

I’m currently reading the Cousin’s War series by Philippa Gregory and Katherine of Aragon is one of the main characters in the story. When I found out we were going to the province of Aragon I couldn’t wait to soak up some history and get a closer look into how the kings and queens of Spain used to live. Aljafería Palace is a medieval Islamic palace and was originally built by the Moorish kings who conquered Spain in the 11th century. Once the Catholic kings took back Aragon the palace was reformed to suit their “Christian” tastes, but luckily the palace has been restored and some of its original Moorish architecture has been uncovered displaying the fusion of these two important parts of Spanish history. Tickets are just 5€ and you can walk there in 15 minutes or so from the Plaza de Pilar. I’d recommend joining a tour if you’re able to (keep in mind they’re in Spanish); listening to the stories of the palace from our guide really enhanced the experience – we even got to go into the “modern” part of the Alcazar which functions as the present day headquarters of the Regional Parliament of the Autonomous Community of Aragon. Apparently the palace is free to visit on Sundays – check out this website for more details on opening times, tours and prices. ...... (follow the instructions below for accessing the rest of this article).
This article is featured in the app "GPSmyCity: Walks in 1K+ Cities" on iTunes App Store and Google Play. You can download the app to your mobile device to read the article offline and create a self-guided walking tour to visit the attractions featured in this article. The app turns your mobile device into a personal tour guide and it works offline, so no data plan is needed when traveling abroad.

Create Your Own Self-Guided Walks in Zaragoza
Guide Name: 5 Things You Should Do and See in Zaragoza!
Guide Location: Spain » Zaragoza
Guide Type: Self-guided Walking Tour (Article (B))
Author: Kate Shoaf
Read it on Author's Website: https://katestraveltips.com/2015/08/12/5-things-you-should-do-and-see-in-zaragoza/
Sight(s) Featured in This Guide: