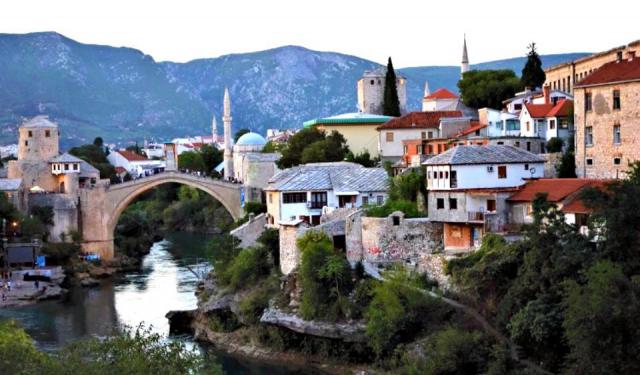 7 Reasons to Visit Mostar in Bosnia and Herzegovina, Mostar, Bosnia-Herzegovina (B)

Mostar is one of the most visited cities in Bosnia & Herzegovina. Now, after we have finally been there, we understand why – it’s such an interesting place!But it’s not only the iconic Old Bridge (Stari Most), charming Old Town, historical past or cultural mixture, that make Mostar a must-see destination in the Balkans – you need to go and see for yourself…

We decided to visit Mostar during our road trip in Croatia – it was only a short detour on the way down to Dubrovnik. In the end, we were so glad we did it because we loved Mostar and we only regretted we couldn’t spend more time there.

The impressive Old Bridge (Stari Most) is the main landmark of Mostar and is considered to be the heart of the city.It spans the Neretva River and connects the two sides of the city.

Originally built in the 16th century, this Ottoman-style bridge was destroyed during the Bosnian war in 1993. Its restoration was finished in 2004 and the Old Bridge has been listed as a UNESCO World Heritage Site since 2005. We enjoyed wandering around the area and taking in the great views, it’s such a picturesque place. ...... (follow the instructions below for accessing the rest of this article).
This article is featured in the app "GPSmyCity: Walks in 1K+ Cities" on iTunes App Store and Google Play. You can download the app to your mobile device to read the article offline and create a self-guided walking tour to visit the attractions featured in this article. The app turns your mobile device into a personal tour guide and it works offline, so no data plan is needed when traveling abroad.