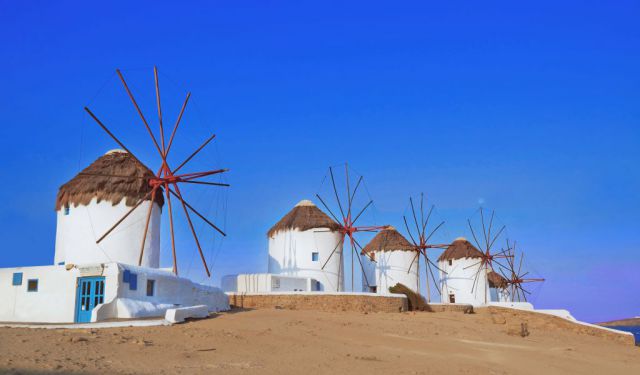 Mykonos is the stuff that dreams are made of. The island is brimming with so much character that, despite not living nearby the town center (chora), we decided to visit it twice.

Here are some of the best spots to capture Mykonos’ unique charm. Whether you’re an amateur or professional, you are guaranteed to bring home some picturesque shots!

Ah… nothing can be more iconic to Mykonos than the world-famous windmills! Five windmills standing proud facing the chora with a bluer-than-blue sky backdrop. It is located at the far end of the town, but it’s really just a 15-minute walk from the Old Port.

Along the coastal trail from Old Port to the windmills, you will pass by the scenic sight of the Aegean sea waves crashing against Little Venice. Little Venice is also said to be one of the best sunset spots in the island, so you better time your schedule well!

Forget all the rage about blue-domed and red-domed churches. In Mykonos, the white-washed chapel of Panagia Paraportiani takes the crown. It’s an understated jewel of Byzantine aesthetic. ...... (follow the instructions below for accessing the rest of this article).
This article is featured in the app "GPSmyCity: Walks in 1K+ Cities" on iTunes App Store and Google Play. You can download the app to your mobile device to read the article offline and create a self-guided walking tour to visit the attractions featured in this article. The app turns your mobile device into a personal tour guide and it works offline, so no data plan is needed when traveling abroad.