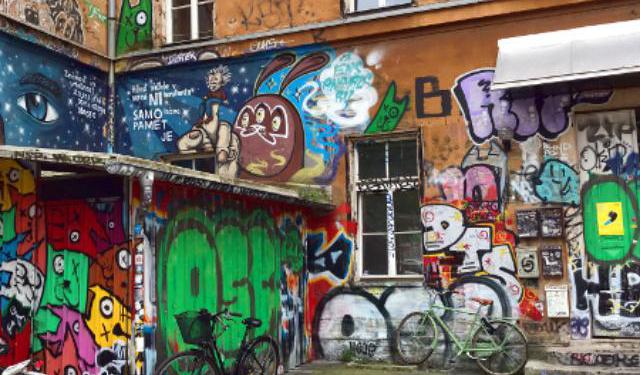 A Complete Guide to Ljubljana’s Metelkova, Ljubljana, Slovenia (B)

One of the top sights of Ljubljana’s alternative scene is Metelkova Mesto (Metelkova City), which is usually referred to simply as Metelkova. The sizable art squat has become a hip hangout for artists, activists, and people looking for a good night out. It’s a site for street art, political action, underground music, and cultural events. As a tourist, Metelkova might seem like a neglected dump, even potentially threatening. But if you’re not afraid to do a little urban exploring, you’ll discover a world of acceptance, community, and art.

Metelkova is one of the largest urban squats in Europe located in abandoned Yugoslavian military barracks in Ljubljana. After the dissolution of Yugoslavia, a large network of cultural and youth organizations petitioned the city to be granted the right to use the barracks for creative purposes. Under threat of demolition and reconstruction, the activists illegally occupied the premises of Metelkova to prevent its commercial redevelopment. Since 1995, the area has been a self-designated autonomous zone, becoming registered as a national cultural heritage site 10 years later. ...... (follow the instructions below for accessing the rest of this article).
This article is featured in the app "GPSmyCity: Walks in 1K+ Cities" on iTunes App Store and Google Play. You can download the app to your mobile device to read the article offline and create a self-guided walking tour to visit the attractions featured in this article. The app turns your mobile device into a personal tour guide and it works offline, so no data plan is needed when traveling abroad.