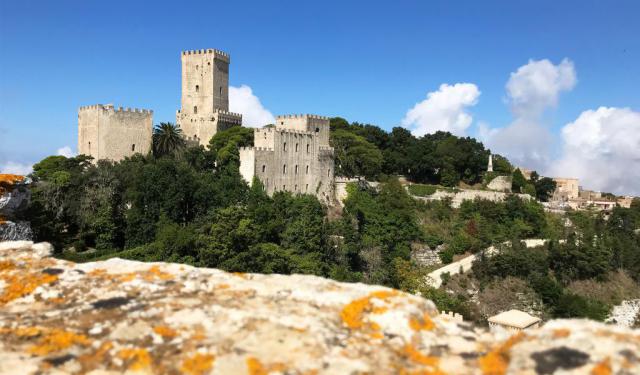 A Day Among the Clouds in Erice, Erice, Italy (B)

Some of my favorite travel experiences have been daytrips, and in Sicily nearly every day felt like a daytrip as we drove around the island, sampling a fraction of the many riches it has to offer. One day in particular that stands out to me was the day we visited the medieval hilltop town of Erice. It felt like we had been transported to a land far, far away from the beaches (and heat) that had occupied the previous few days.

Located near Trapani on the northwest coast of Sicily, the star attraction in Erice is the Castello di Venere, a 12th century Norman castle that juts over the side of the mountain like a siren on the bow of a ship. Built on top of a temple to Venus, it’s long been a site of importance that’s outlasted several different civilizations (including a cult that practiced a form of sacred prostitution!). The town has had various names of the years, its current name coming from the Greek hero Eryx, and what I found particularly interesting is that it was one of several Italian cities that was renamed in the 1930s under Mussolini in honor of its ancient past. ...... (follow the instructions below for accessing the rest of this article).
This article is featured in the app "GPSmyCity: Walks in 1K+ Cities" on iTunes App Store and Google Play. You can download the app to your mobile device to read the article offline and create a self-guided walking tour to visit the attractions featured in this article. The app turns your mobile device into a personal tour guide and it works offline, so no data plan is needed when traveling abroad.