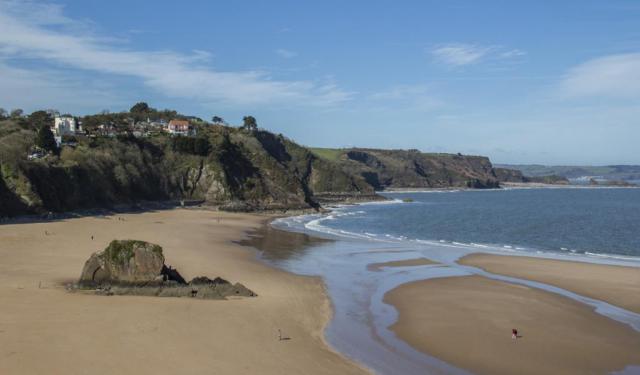 A Day Out in Tenby, Pembrokeshire, Wales, Tenby, Wales (B)

It was a very mixed group that gathered on by the tractor on Tenby beach as instructed. Old and young, able and not so able. There was no sign of a boat. Waves crashed on to the beach behind us as we all looked uncertainly at each other. There was no sign of a boat nor of anyone in authority. We all cheered up when a young man arrived, jumped into the tractor and reversed it and the jetty attached to it to the water’s edge. A few minutes later a boat arrived. As the boat nudged the end of the jetty each passenger was handed carefully aboard. There was a pause in this operation when a large wave forced the boat to retreat out to sea but it was not long before everyone was on board and we were racing towards Caldey Island. It was too early in the season for the ferries to be running regularly to the island but I had been fortunate to discover Tenby Boat Trips had started operating their Seal safari. It was a great trip with an excellent skipper whose knowledge of the island and wildlife kept us informed, interested and on the sheltered side of the island. We saw two seals lying on the rocks, two swimming in the sea and a lone puffin bobbing on the waves as well as a variety of sea birds on the cliffs. ...... (follow the instructions below for accessing the rest of this article).
This article is featured in the app "GPSmyCity: Walks in 1K+ Cities" on iTunes App Store and Google Play. You can download the app to your mobile device to read the article offline and create a self-guided walking tour to visit the attractions featured in this article. The app turns your mobile device into a personal tour guide and it works offline, so no data plan is needed when traveling abroad.