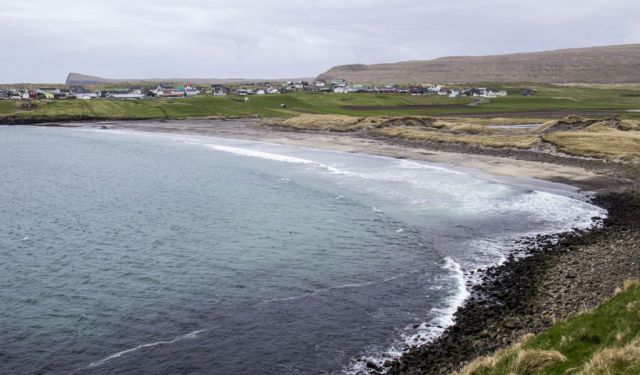 A Day Trip to Sandoy One of the Faroe Islands, Sandoy, Denmark (B)

Sandoy, one of the Faroe Islands is relatively flat and very green. It was named after its large beach and sandy soil. It is the only island with dunes – black basalt sand dunes. Birds congregate in large numbers on the cliff face of its headland and tourists seeking an adrenalin rush can replicate the hunting techniques of the islanders by rappelling an activity similar to abseiling. I travelled there on the ferry from Gamlarætt Ferry Port on Streymoy Island to the port of Skopun. This pretty little port has an unusual claim to fame as it was once the proud owner of the biggest post box in the world. The blue post box is the size of a house and sometimes used by fishermen as a landmark. It was built by two fishermen hoping to achieve some fame for their village but it is no longer recognised by the Guinness Book of Records as the largest in the world.

Hanna, our guide, met us in Skopun and we set off in a small minibus to explore the island. We drove through a valley, one of the most fertile areas in the Faroe Islands, towards Sandur. The road we took was the first road to be completed in the Faroe Islands in 1917. It passes by two small lakes, Grothusvatn and Sandsvatn Lake. The latter is the largest lake on the island of Sandoy and the third largest in the Faroe Islands. ...... (follow the instructions below for accessing the rest of this article).
This article is featured in the app "GPSmyCity: Walks in 1K+ Cities" on iTunes App Store and Google Play. You can download the app to your mobile device to read the article offline and create a self-guided walking tour to visit the attractions featured in this article. The app turns your mobile device into a personal tour guide and it works offline, so no data plan is needed when traveling abroad.