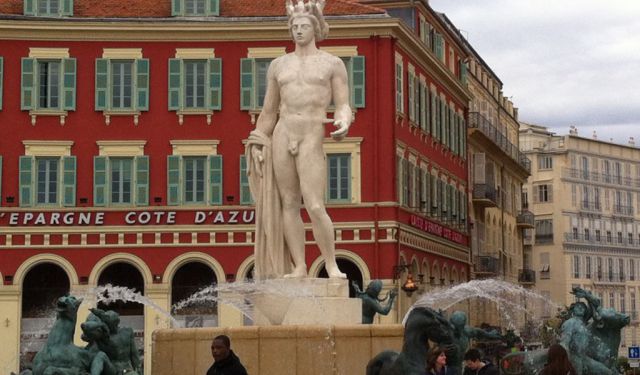 If you visit Place Massena, in the very heart of Nice, you will see a large fountain called the “Fontaine du Soleil”, the Sun Fountain. There are 5 bronze sculptures in the basin and in the centre stands an impressive marble Apollo. He is 7 meters (23 feet) tall and weighs in at 7 tons. He is definitely the king of the square and you would think this giant would be admired and respected… but not by the Niçois.

When the Sun Fountain was unveiled in 1956, the people of Nice were not impressed. Apollo’s “job” according to mythology is to carry the sun across the sky every day and he usually does this in his chariot pulled by 4 horses. But this Apollo didn’t have a chariot and the 4 horses were on top of his head, forming a sort of crown.

The spectators claimed that he looked like an advertisement for the most popular automobile at the time, the Renault 4CV, known as the “4 horsepower”. So the magnificent Greek deity was saddled with the nickname – “the 4 horsepower statue”. ...... (follow the instructions below for accessing the rest of this article).
This article is featured in the app "GPSmyCity: Walks in 1K+ Cities" on iTunes App Store and Google Play. You can download the app to your mobile device to read the article offline and create a self-guided walking tour to visit the attractions featured in this article. The app turns your mobile device into a personal tour guide and it works offline, so no data plan is needed when traveling abroad.