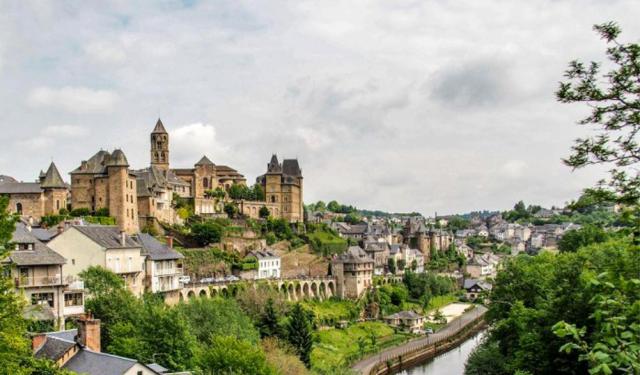 Uzerche is a town in the Correze department of the Nouvelle-Aquitane region of France which includes the Limousin. The town is perched on a rocky outcrop above the Vezere River. Uzerche dates back to the Roman times, and it was the last place the Gauls fought Julius Caesar.

Situated at the crossroads of two trade routes, Uzerche developed into an important administrative, religious and political center between the 5th an 8th centuries.

With its fortified town wall, small fortress, and defensible location, Uzerche was able to fend off several attacks though it did fall under siege to Saracen forces in the 8th century.

The siege lasted seven years, and it is said that in a final desperate action its starving inhabitants fattened up their last two cows and sent them out to the besiegers. Seeing the conditions of the bulls, the Saracen forces concluded Uzerche was too well provisioned and gave up trying to starve them out. To date, these bulls are still on the city crest. ...... (follow the instructions below for accessing the rest of this article).
This article is featured in the app "GPSmyCity: Walks in 1K+ Cities" on iTunes App Store and Google Play. You can download the app to your mobile device to read the article offline and create a self-guided walking tour to visit the attractions featured in this article. The app turns your mobile device into a personal tour guide and it works offline, so no data plan is needed when traveling abroad.