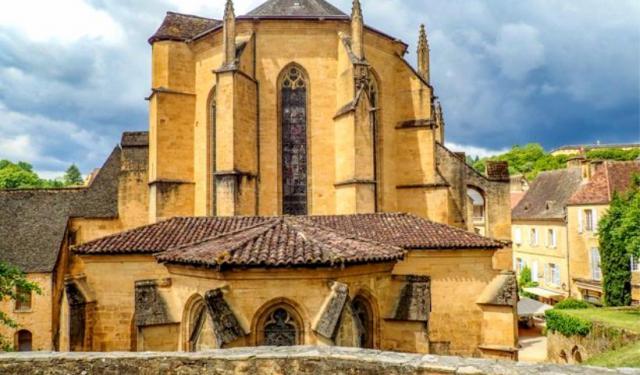 A Guide to Visiting Sarlat, Sarlat-la-Caneda, France (B)

Sarlat-la-Caneda is a lovely French village in the Dordogne Valley. It is home to the highest concentration of medieval, Renaissance, and 17th-century architecture of any town in France. Its picturesque lanes and facades display the privileged status Sarlat received in return for its loyalty to the French crown during the Hundred Years’ War.

In addition to its attractive architecture, Sarlat features one of the best markets in France. While Saturday is its biggest market, Sarlat also holds a large market on Wednesday on the Place de la Liberte. As I love markets, I passed by fields of poppies and visited Sarlat on a Wednesday.

My Rick Steve’s guidebook directed me to public parking on the north side of town. As I approached Sarlat with its bustling atmosphere, I quickly realized after completing my farm stay chores and driving 1.5 hours, I was far too late to find a parking spot in a designated parking area.

As such, I took the first left that led me away from the city as I didn’t want to try driving in town with traffic and French signs. As luck would have it, many cars were parked on the side of the one-way road. While I had to go pretty far up the hill, I followed suit and snagged the last place where a car could fit. ...... (follow the instructions below for accessing the rest of this article).
This article is featured in the app "GPSmyCity: Walks in 1K+ Cities" on iTunes App Store and Google Play. You can download the app to your mobile device to read the article offline and create a self-guided walking tour to visit the attractions featured in this article. The app turns your mobile device into a personal tour guide and it works offline, so no data plan is needed when traveling abroad.