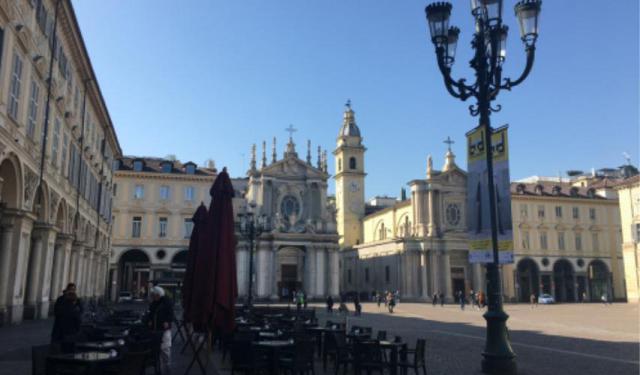 A Morning Walk to Villa della Regina, Turin, Italy (B)

It was my friend Antonio, who comes from Turin, who told me about Villa della Regina (Villa of the Queen) on the outskirts of the city. I wondered if it was a bit far to walk, but a google search told me it was just 36 minutes by foot from my hotel. I set off around 10am taking a slight detour via the glorious Piazza San Carlo where I stopped for coffee and a croissant at Stratta cafe.

From there I made my way to via Po and down into Piazzo Vittorio Veneto and across Ponte Vittorio Emanuele I. The bridge was built by Napoleon in 1807 when he ruled Piedmont. In 1814 when Vittorio Emanuele I re-entered the city he ordered all trace of the French occupation to be destroyed – except this bridge! The River Po is the longest river in Italy and famous to foodies for the best risotto rice is said to be that grown in its valley.

It costs €5 to go inside. I was offered a tour in Italian but not English. I decided to just wander round as I’m happy doing that. You first go through a display of the history of the house and the vineyard, which offers a lot of information in various languages, including English. There are also bottles of the wine and various products to see. ...... (follow the instructions below for accessing the rest of this article).
This article is featured in the app "GPSmyCity: Walks in 1K+ Cities" on iTunes App Store and Google Play. You can download the app to your mobile device to read the article offline and create a self-guided walking tour to visit the attractions featured in this article. The app turns your mobile device into a personal tour guide and it works offline, so no data plan is needed when traveling abroad.