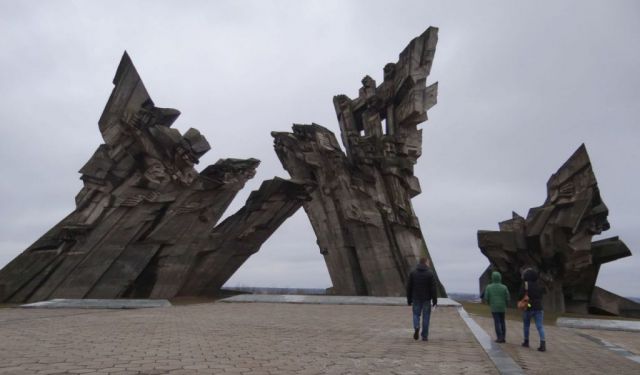 After 18 years of living in Kaunas City I finally for the first time visiting a place that every Lithuanian should visit at least once in their life. It’s The Ninth Fort. It’s the stronghold which during Soviet Union Occupation was used as a prison and way-station for prisoners being transported to labour camps. Later on, when Nazi Germany occupied Lithuania this fort was used as a place of execution for Jews, captured Soviets and other people.

There are two parts of this museum. One with all historical information, letters, photos, things of prisoners and everything that was found and given. All those photos and exhibits make you question what is humanity and if we are starting to loose it. So many people were killed and tortured. More than 50, 000 people were killed in this fort. About 40, 000 were Jews. If these numbers don’t shake you up then I don’t know what can.

Just looking at all those things and knowing that not long ago they belonged to real people left me with a strange feeling inside. The hall in which all these things and information was stored was cold, and it in a way added up to the overall feeling. I felt cold, horrified, sad and vulnerable. ...... (follow the instructions below for accessing the rest of this article).
This article is featured in the app "GPSmyCity: Walks in 1K+ Cities" on iTunes App Store and Google Play. You can download the app to your mobile device to read the article offline and create a self-guided walking tour to visit the attractions featured in this article. The app turns your mobile device into a personal tour guide and it works offline, so no data plan is needed when traveling abroad.