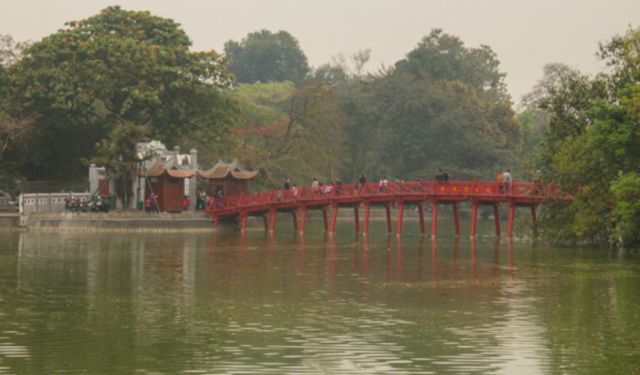 One of the purest voices I have ever heard was singing a haunting melody as we entered Ba Dinh Square in Hanoi. Ahead of us the mausoleum of Ho Chi Minh glowed pink. The guards in their stark white uniforms stood to attention on ether side of the massive entrance. People strolled around the square or sat talking quietly on the huge grassy area opposite the mausoleum. It was so romantic. Yet by day it is just a large empty space surrounding a massive square building. Visitors to the mausoleum queue outside the building before shuffling past the embalmed body of this highly respected icon of Vietnamese politics. Before going inside their dress will have been checked for its suitability, bags and cameras will have been stored in the cloakroom and some are even made to remove their spectacles. The contrast is typical of a country emerging from the shackles of Communism.

The next morning, still on a high after my lovely evening walk I rose early and walked through the old town to Hoan Kiem Lake. On my way I called in at the pharmacy in the hope they would have some re-hydration sachets. I had only just finished enunciating the word dehydration when a large box was produced from under the counter and a handful of sachets were produced from in its depths. Ten were counted out and I was told that was one litre, another ten were counted out and I was too that was two litres and would cost me twenty thousand Vietnamese Dong. I paid up and left fervently hoping she had understood I wanted to re-hydrate and not de-hydrate. She had and they worked a treat. ...... (follow the instructions below for accessing the rest of this article).
This article is featured in the app "GPSmyCity: Walks in 1K+ Cities" on iTunes App Store and Google Play. You can download the app to your mobile device to read the article offline and create a self-guided walking tour to visit the attractions featured in this article. The app turns your mobile device into a personal tour guide and it works offline, so no data plan is needed when traveling abroad.