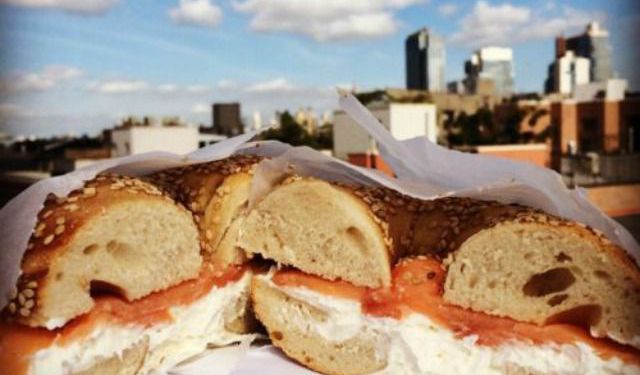 For women of a certain age, the Sex and the City theme tune was the soundtrack to our single 20s (and 30s). Although I didn’t really start watching it until I moved to Amsterdam in 2006, there were enough re-runs over the years that I felt I knew every man drama, every cosmopolitan and every killer pair of heels in the girls’ lives as intimately as my own. I’d never even been to New York when I started watching Carrie & Co., but already I felt Miranda’s pangs of dread about leaving Manhattan for Brooklyn keenly. Surely that would be like moving to Amsterdam Noord eight years ago? Unthinkable!

Of course, we couldn’t only drink cocktails. Food might be necessary too: mostly in the form of brunch, tacos and oysters. Because New York, New York…

So when, in the 2008 Sex and the City film, Miranda crossed the Brooklyn Bridge to meet Steve having finally resolved to put the past behind them and get back together, it felt symbolic. I’ve watched that scene over and over, and it gets me. Every. Single. Time. I may be a feminist, but I’m a total sucker for romance – especially when that romance comes in the form of a feisty red-headed career woman and a, umm, cute bartender.  ...... (follow the instructions below for accessing the rest of this article).
This article is featured in the app "GPSmyCity: Walks in 1K+ Cities" on iTunes App Store and Google Play. You can download the app to your mobile device to read the article offline and create a self-guided walking tour to visit the attractions featured in this article. The app turns your mobile device into a personal tour guide and it works offline, so no data plan is needed when traveling abroad.