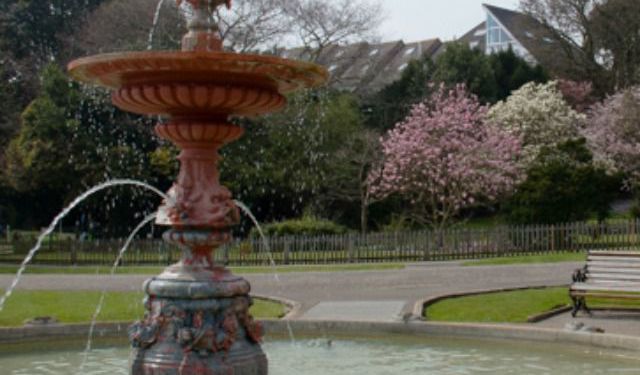 A Stroll through the Town of Poole in Dorset, Poole, England (B)

When the sea fret rolled in across Poole Quay I thought that was the end of my day out in Poole but then I began to enjoy this ethereal experience and the sound of shipping hooting in the harbour close by. So I kept to my plan to treat myself to some chips and sit on the harbour wall to eat them – but I only had Lord Baden Powell for company. The life size sculpture was erected on the quay to celebrate the founding of the Scout Movement in 1908 following the success of an experimental camp on Brownsea Island in Poole Harbour.

Emerging through the swirling mists I could see a strange shape on the water’s edge that appeared to be a mixture of viewing platforms and a huge sculpture. It was the the Sea Music Sculpture by Sir Anthony Caro. It was positioned right on the water’s edge to link the sea with the shore and to allow visitors to interact through stairs and platforms and to view the sea, the harbour and the town.

I arrived at the Custom House at the same time as a guided tour of Poole and lingered long enough to learn that it was the site of the most famous incident involving the notorious Hawkhurst Gang that had terrorised the south coast during the eighteenth century. When they were caught with an illegal cargo of tea it was seized, locked in the Custom House on Poole Quay and guarded by a naval ship. In the early hours of the morning, when the guns of the ship dipped below the quayside thirty members of the gang broke into the Custom House and grabbed as much of the tea as they could carry before escaping on horseback. In the aftermath of this raid two innocent people were murdered and as a result the ringleaders of this gang were betrayed, captured and executed thus ending their reign of terror. When this Grade II listed building became redundant as a government building it was allowed to fall into disrepair but it has now been restored to its original Georgian splendour and converted into a bar on the ground floor with a restaurant above. ...... (follow the instructions below for accessing the rest of this article).
This article is featured in the app "GPSmyCity: Walks in 1K+ Cities" on iTunes App Store and Google Play. You can download the app to your mobile device to read the article offline and create a self-guided walking tour to visit the attractions featured in this article. The app turns your mobile device into a personal tour guide and it works offline, so no data plan is needed when traveling abroad.