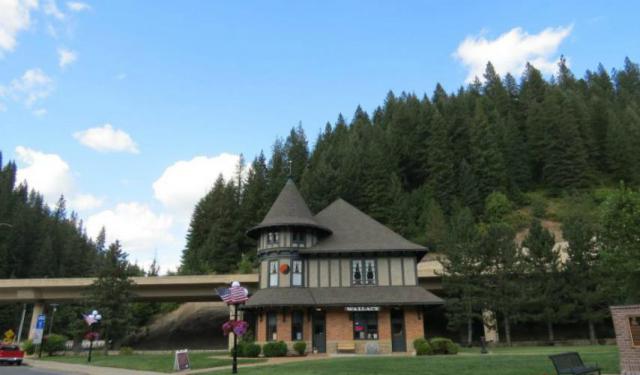 I’m going to tell you about a town called Wallace, in northern Idaho’s panhandle. It’s a curious tale — full of inspiration, grit, and tenacity. And how the Wallace of today still reflects those same qualities and more. Keep reading to see why it’s a town you’ll love, too.

Wallace was established in 1884, named for Colonel William Wallace, the first settler. When silver lodes were discovered at about the same time, a boom community sprang up around William’s cabin. Wallace became the principal city of “Silver Valley” — an area that has since produced over a billion ounces of silver. Plus a significant amount of lead, zinc, galena, and copper.

As the small town grew within its limited physical space (surrounded by mountains and the south fork of the Coeur D’Alene River), homes were built on the hillsides with a series of wooden stairs and raised boardwalks to access them.

Perhaps that sounds like a rather benign beginning — and a very successful story of fortune and progress. But you’d only be hearing part of the story if I stopped there. ...... (follow the instructions below for accessing the rest of this article).
This article is featured in the app "GPSmyCity: Walks in 1K+ Cities" on iTunes App Store and Google Play. You can download the app to your mobile device to read the article offline and create a self-guided walking tour to visit the attractions featured in this article. The app turns your mobile device into a personal tour guide and it works offline, so no data plan is needed when traveling abroad.