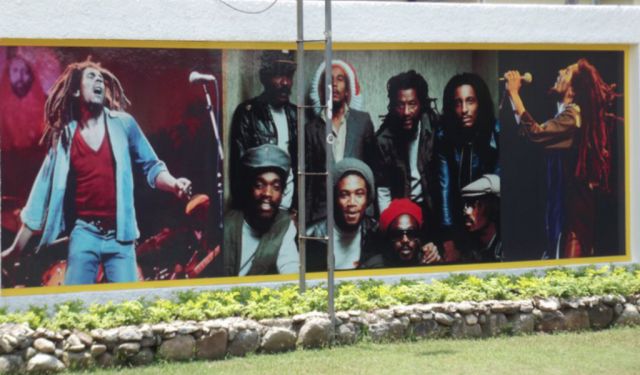 A Visit to the Bob Marley Museum, Kingston, Jamaica (B)

The Bob Marley Museum was not on my list of places to see on this visit to Kingston but when my other plans fell through, it sounded like the perfect backup.

Located at 56 Hope Road in a 19th-century colonial house that was the home the Reggae superstar, Rastaman and activist was living in when he died in 1981, it was converted into a museum by his widow, Rita Marley, and opened to the public on May 11, 1986.

On the main floor is a working recording studio, memorabilia from Marley’s performances, and numerous awards. Included as well are costumes that were worn by the I Threes — Rita Marley, Judy Mowatt and Marcia Griffiths — his backup singers from 1974, and an image of Bob.

On the second floor is Bob’s bedroom, with his guitar. Next to the room is a kitchen, family room turned portrait gallery and a replica of the record shop the Wailers owned. Included is the bicycle they used to deliver their records. The second floor also has memorabilia from Bob’s trips to Africa, including his performance at Zimbabwe’s independence celebration. ...... (follow the instructions below for accessing the rest of this article).
This article is featured in the app "GPSmyCity: Walks in 1K+ Cities" on iTunes App Store and Google Play. You can download the app to your mobile device to read the article offline and create a self-guided walking tour to visit the attractions featured in this article. The app turns your mobile device into a personal tour guide and it works offline, so no data plan is needed when traveling abroad.